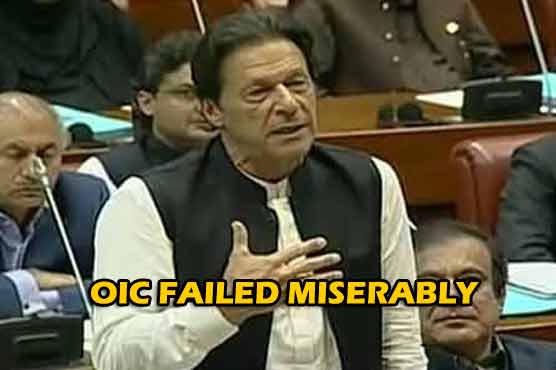 In the wake of freedom of speech, these contests will keep on happening. Unified voice is required.

(Web Desk) – Senate passes a condemning resolution against blasphemous caricature contest in Holland on August 27, 2018. Senator Shibli Faraz, Leader of House in Senate, presented it which was passed unanimously. Imran Khan’s arrival in Senate and clarifying state’s policy regarding caricature contest is quite encouraging. He represented the views of nation which was victim of restlessness from the time Dutch anti-Islam politician Geert Wilders announced the blasphemous competition. Joining hands with Organization of Islamic Cooperation (OIC) and raising the matters at UN General Assembly are quite decisive steps compulsory to be taken at earliest. Unfortunately OIC has been failed miserably concerning this.

Indeed it’s a failure of OIC which has been indulged in internal clashes and has remained unsuccessful in communicating a unified voice against Islamophobes around the world. In his maiden speech in the Upper House of the Parliament Imran Khan said the recurrence of such blasphemous activities to desecrate the Holy Prophet Muhammad (Peace Be Upon Him) was the collective failure of the OIC.

The prime minister spoke soon after the House unanimously adopted a resolution condemning the “venomous, vicious and contemptuous decision of Mr. Geert Wilders, the notorious Islamophobe, and belonging to the Dutch Party of Freedom to hold a ‘Draw Muhammad Cartoon Competition’ to be held later this year in the Netherlands.”

He said as he knew the western mindset, they would not backtrack from such activity in name of the freedom of expression as majority in the west did not know as how the Holy Prophet was revered among the Muslims. He said the west needed to be realized as how hurting it was for the Muslims and recalled that after the Salman Rushdie’s novel The Satanic Verses, such incidents had happened repeatedly.

He said the anti-Muslim elements in the west had found it an easier way to malign and hurt the Muslims by carrying out such acts. The prime minister said his government would make efforts to evolve consensus at the level of OIC.

He said four European countries had introduced jail sentence for even interpreting the Holocaust neglecting the freedom of expression. However, the prime minister reiterated that the Muslim world would first have to unite before making the west realize that Muslims felt more hurt on such actions as the killing of around six million people in Holocaust was to them.

Responsibility of the Muslims

Although no Muslim will like to even think of such blasphemous contests, regrettably they are happening and that too in the part of the world where freedom of speech is given high esteem. Prime Minister’s response on the matter should be given due significance especially in OIC which instead of raising Muslims world’s voice is victim of division on sectarian bases and is indulged in internal clashes. On the other side, it is responsibility of Muslims to not publicize or promote any such contest and Islamophobes. Indeed staying perseverant and active on the national and international forums can convey a resilient, effective message to haters of Islam.

Done with input from APP