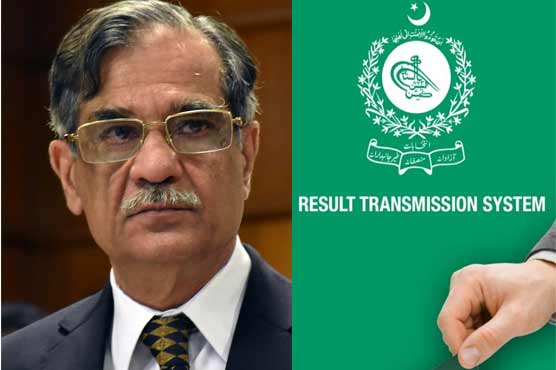 ISLAMABAD (Dunya News) – Chief Justice of Pakistan Justice Saqib Nasir has expressed displeasure over the failure of the Result Transmission System (RTS) during the July 25 election.

He said the ECP spent millions on the technology yet it failed, adding that he repeatedly telephoned the chief election commissioner but didn’t receive a reply on election day.

The chief justice, while allowing the petitioner to contest on reserved seats, said Raja had requested a vote transfer on April 23 but the ECP did not do anything in this regard.

The ECP was to pay Rs170 million to the National Database and Registration Authority (Nadra) despite the collapse of the newly-developed state-of-the-art Result Transmission System (RTS).

The Election Commission of Pakistan (ECP) last week sent a letter to the Cabinet Division directing it to conduct an inquiry into failure of its Result Transmission System (RTS) during conduct of general elections on July 25.

According to the terms of reference (TORs) of inquiry, the committee will thoroughly analyse RTS, fix responsibility of its failure and also make recommendations for future course of action.

Earlier, an official of ECP while finalising the reasons of failure of RTS (Results Transmission System) on July 25 (Election-2018) said that, it is an international practice that any system been introduce is practiced before launching but due to shortage of time RTS could not be tested.

He also said that it was the demand of parliamentarians to launch and practice RTS in election 2018. Now ECP was analysing the reasons behind failure of RTS and share the findings with the media.

The official added: “For the first time an online system to share results from 85,000 polling stations around the country to the central headquarters in Election Commission of Pakistan was introduced.”

The commission, he said, was investigating those complaints where results on a piece of plain paper were released instead of the ECP’s-issued Form-45.

Sufficient copies of the forms were available with the commission, he added.