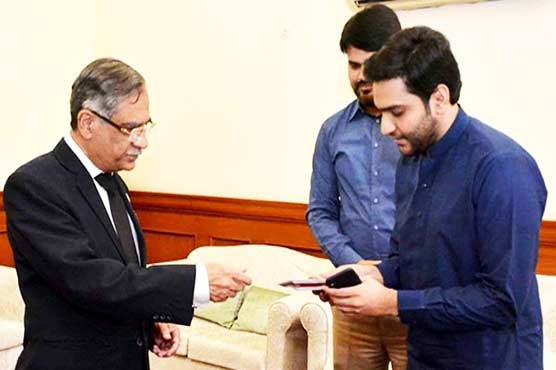 The cheque worth Rs10 million was handed over to Chief Justice of Pakistan (CJP) Mian Saqib Nisar.

LAHORE (Dunya News) – The employees of Dunya Media Group, while participating in the process to curb water crisis in Pakistan, have donated their two-day salary to the funds for the construction of Diamer-Bhasha and Mohmand dams.

On the occasion, the top judge appreciated the contribution and expressed his best wishes.

The fund was established on July 4 by CJP Saqib Nisar when he funded Rs1 million with an ambition to eradicate water issue from the country.

According to him, “Both projects are vital to achieve water and energy security; therefore, all stakeholders should play their role in the initiation and timely completion of these projects.”

Storage capacity of the dams

On the other side, through Mohmand dam 1.2 million acre feet water will be stored while it will produce 800MW of electricity.

These projects undoubtedly will assist the government in generating more electricity and most important of all they would help in storing water worth billions of dollars.

Both the dams are quite pertinent as they would fulfil multiple purposes. Moreover they will be required to be constructed at the earliest as water worth billions of dollars is wasted on annual basis.

According to officials, the total cost of Diamer-Bhasha Dam is around Rs1450 billion. From this amount, Rs650 billion will be used for the construction of reservoir.

On the other side, cost of Mohmand dam is Rs300 billion.

Other ways to participate

Masses’ contribution in the fund can be done if they send an SMS by typing ‘dam’ and sending it to 8000, charges are Rs10 on each message.

The donors can also make online donations to the fund through internet banking, automatic teller machines (ATM) and other alternate delivery channels (ADC) using IBAN of their respective bank.

Have a look: Hamza Ali Abbasi donates Rs300,000 for construction of dams

The donations can also be made through credit / debit cards from anywhere in the world by clicking the “Online collections for Supreme Court Diamer Bhasha and Mohamand Dams Fund” on the SBP’s web page.

The overseas Pakistanis may deposit their contributions to the fund in cash, cheques, pay orders, demand drafts etc at the Pakistani missions in the relevant country.