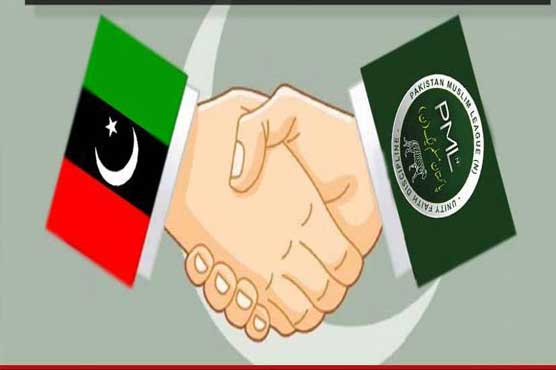 This was the first formal contact between PPP and PML-N to get support of PPP’s member provincial assembly.

During the meeting, Makhdoom Ahmad said that it was early to anything pertaining to alliance with the PML-N.

He said that the party chairman Bilawal Bhutto Zardari and co-chairman Asif Ali Zardari will take the decision to help PML-N form government.

The PML-N president also telephoned former leader of opposition in National Assembly and PPP leader Syed Khursheed Shah and is likely to meet him in Islamabad tomorrow.

The meeting is expected to discuss joint opposition strategy.

On the other hand, PPP leader expressed desire to meet former NA speaker Sardar Ayaz Sadiq and is likely to meet him today.

On Friday, Bilawal Bhutto Zardari while addressing a press conference advised the political parties to use Parliament’s floor to protest against the alleged rigging in general elections.

He rejected the proposal of not taking oath presented in the All Parties Conference (APC) and suggested the political parties to record their protest in a democratic way and shouldn’t leave the parliament.

In a current neck and neck competition, both of the parties are required to have a support of enough number of independents while aiming to have government in Punjab.

Besides PMLN and PTI, the other key players in the battle ground include independents with 30 seats, PML Q with 7 seats, PPP with 6 seats while BAP, Functional League and PAR has one seat each.