(WebDesk) - Online tormentors often left no stone unturned to malign and deride journalist who disagrees or refuses to take dictation and/or stand by to their story firmly, avoiding pressure to step back, particularly the female journalist.

Female journalists and the name calling

The name calling is a usual practice. They libel her with some explicitly disgraceful tags and labels like the dirty whore, sucking parasite, an idiot, a lobbyist, a foreign agent, ugly liar, paid stooge and many more. Not only this, It has been observed that as a very routine business, female journalists are threatened with rape, gang rape, sexual torture, physical torture in hideous detail.

Female journalists face this vilification irrespective of their age, cast, religion and the nationality over the internet. In recent pasts, hundreds of such incidents have been reported. Be it India s Barkha Dutt, UK s Christaina Amanpour, Van Badham s of Australia or Asma Shirazi of Pakistan. Often the political, religious, ethnical and cultural parties’ paid troll and bots Frankensteins from their bogus accounts in a group, attack women journalists online.

Majority of these trolls are supporters of political parties and political leaders.

Ahead of general elections 2018 in Pakistan, such malpractices from fake accounts have become a daily torture for journalists across the board. The reporting of the facts and figures and coverage of an event unfavourable to the opponent political party’ side fall the journalist to become a prey of online victimization and deriding.

United we stand; Divided we fall

The Pakistani journalist fraternity particularly the female journalists who are also hosting the current affair shows, firmly stood with the well-known reporter and TV anchor person Asma Shirazi after the online bullies and trolls beleaguered and harassed her over the false denunciations and fabricated allegations.

Since the Nawaz-Maryam arrival night, the well-known anchor person and a highly credible female journalist Ms. Asma Shirazi, has been a target of the trolls for her routine coverage of former Premier and PMLN Supremo Nawaz Sharif and daughter Maryam Nawaz’s return to Pakistan to surrender to the NAB after the accountability court has convicted them in the Avenfield Reference Case.

The much profiled and hyped event grabbed full media attention across the globe. Local as well as international media was also travelling with the father daughter duo to cover the historic arrival ahead of inevitable detention.

Next day once the whirl of the Nawaz-Maryam Arrival and then arrest rested, certain selected video bites of the conversation between Sharif and Shirazi have started to circulate on whatsapp, facebook and twitter as the leaked secretive telephonic conversation between the sentenced PMLN supremo and the veteran journalist and anchor person, Asma Shirazi.

Shirazi along with other national and international reporters was also a part of the group of journalists, that were present at Abu Dhabi Airport. The ousted Prime Minister and the supreme leader of the PMLN, at Abu Dhabi airport talked to the journalists in a telephonic presser. 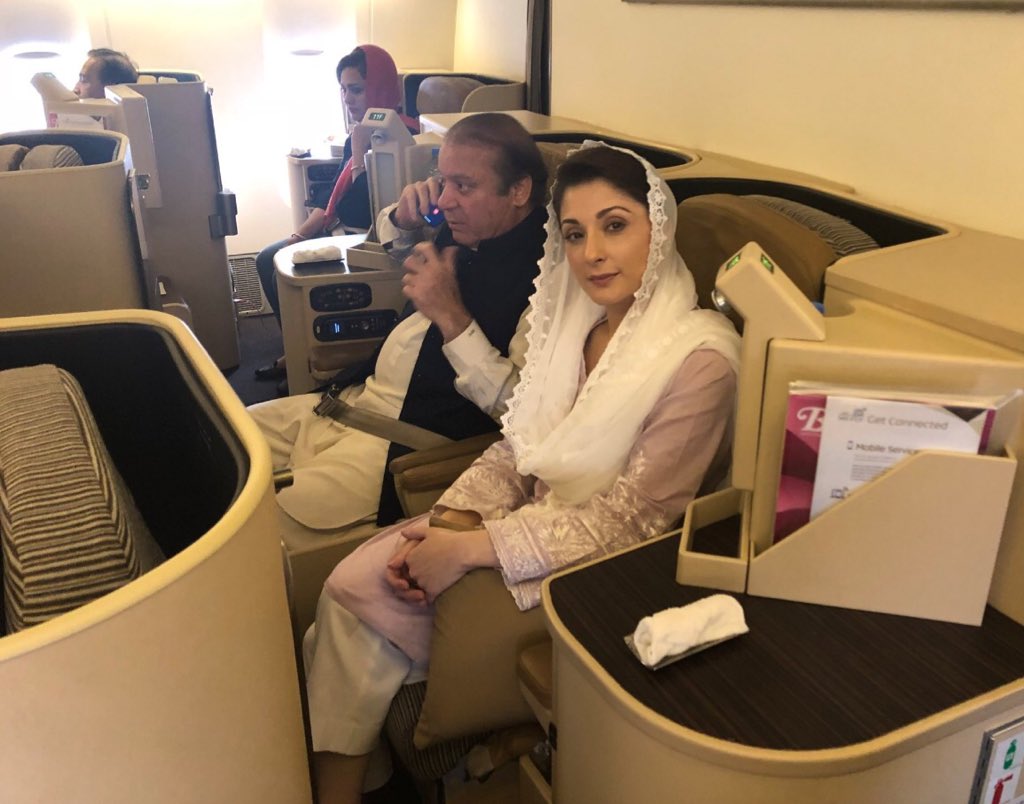 Asma Shirazi can be spotted on while travelling with the Nawaz Sharif and Maryam Nawaz on their return. Photo: Twitter

The story of the smartly edited clips

In those carefully edited video clips, Sharif can be seen and heard in a telephonic conversation with Shirazi, apparently complaining about his exclusive interview given to her only, did not go air and she can be heard, allegedly explaining Nawaz Sharif, about the impediments hindered to air the interview.

These clips wreaked a havoc to her. She was derided by the cyber bullies for allegedly being a paid stooge of Sharifs.

She uttered all those words in the presence of all the journalists who have also spoken with Sharif as it was the telephonic conversation. It was all a blatant conversation, never a secret call to be claimed as a leaked audio conversation between the convicted Prime Minister and the journalist to appease him or to serve him.

The fellow journalist and the famous Dunya News TV anchor person, Wajahat Hussain, who was travelling with her and other journalists to cover the same event, was the first one who came forward in favour of Asma Shirazi.

Along with the leaked call drama, other false proclamations are being made to slander the journalist. She is terribly being ridiculed for allegedly crying over the Nawaz Sharif and Maryam Nawaz imminent arrest.

One of the tweet of the young journalist Siddiq Jan unintentionally brought this traumatising fiasco to Asma shirazi.

Later, he tried to clarify about Asma Shirazi’s relation with any such incident in his another vague tweet;

When the smearing campaign was launched, Asma Shirazi herself defied and renounced the trolls and the cyber bullies.

The global support network for women, The coalition of women in Journalism has issued a statement on Sunday in the woke of threat and harassment campaign being fuelled up against the veteran and credible female Pakistani journalist like Asma Shirazi ahead of general elections 2018.

“We have observed that majority of these trolls are supporters of political parties and political leaders. To target journalists for doing their job during an election campaign is an obstruction to public access to information at a critical time in the democratic process. No journalist should have to face harassment for doing their job. We encourage all stakeholders to join efforts to make reporting a safe endeavour for women journalists’’, the statement said.

The attempts to stifle the work of women journalists go against the freedom of press guaranteed under the Constitution of Pakistan, should be condemned across the board.

Fellow journalists took the trolls after Asma Shirazi, to the task

Female fellows of the Pakistani journalism fraternity have joined hands with Asma Shirazi and raised voice against the mind set that consider women journalists, the vulnerable target to supress, malign, slander, criticise, insult or disparage in the line of duty and the work related tasks to manipulate them.

The attacks usually intensifies ahead of any major political or social development and discourse, being covered by the media particularly by the female reporters, analysts, anchor persons, social media activists and freelancers.

The former BBC journalist and HUM news anchorperson, Amber Rahim Shamsi while extending her support to the fellow journalist, sternly criticised the trolls and called the mindset behind trolls is bent towards fascism.

Renowned outspoken female journalist and analyst Marvi Sirmed while lauding Asma shirazi for her outstanding impartial and substantial journalism with such fearless and confident approach, reprimanded the online attackers.

Former journalist and prominent media person, Mehr Tarar has also expressed her solidarity with  Asma Shirazi and said, Pakistan is a free country and no one can curb any one including journalist’s right of freedom of expression.

The eminent and veteran female journalist, anchor person and analyst Naseem Zahra emboldened Shirazi while suggesting her to continue her duties with same courage and passion she has been doing since years.

Beena Sarwar while extending her support with Asma Shirazi, encourage the women journalist to remain firm and stand unfalteringly

Another famous TV Anchorperson Meher Bukhari also condemned the smear campaign being run against the veteran and prominent female journalist Asma Shirazi for unveiling the facts. She complained that the people often deny their struggles in the line of duty and in the search of presenting the facts from all the angles.

The News One Anchor person second the concern of Nawaz Sharif asking Asma Shirazi for not airing his interview. She said,

Afia Salam upcheered her colleague and said that these deriding titles should be wore as medals as they are the proofs of her upright work in the line of journalistic norms.

The journalist and anchorperson Alina Shigri said covering a story is the routine practice which is being ridiculed for no reason and Shirazi should stay strong against these trolls.

Maria Memon, the famous anchor person in her tweet emphasizes to remain united and unequivocal against the smearing campaigns being ran to deride female journalists.

Earlier, the Digital Rights Foundation ran by the IT expert, Nighat Dad, has issued a statement in solidarity with Shirazi says, Digital Rights, Hamara Internet and the Network of Women Journalists for Digital Rights condemn the unreasonable attacks against Asma Shirazi. These attempts to stifle the work of women journalists go against the freedom of press guaranteed under the Constitution of Pakistan.

Asma Shirazi is such a veteran, well respected and a credible journalist that all the fraternity jointly and unequivocally condemned the online bullying of the journalists. Not only the female journalists raise their voice also the male journalists have taken the trolls to the tasks. The renowned media personality Mosharraf Zaidi took to the twitter and called female journalists of Pakistan, the heroes.

While the investigative reporter and often becoming the target of the trolls and cyberbullying, Umer Cheema said,

Not only the national but the international fellow journalists have come forward.While expressing his concern, the distinguished and the sound Indian Journalist Shekhar Gupta in his tweet compared the deplorable and depleted situation of freedom of press in India and Pakistan alike.

One 2014 study on Twitter abuse targeting celebrities found that journalism is the only category where women received more abuse than men, with female journalists receiving roughly three times as much abuse as their male counterparts.

It is a high time to discourage the malpractice of trolling and online insulting unitedly and unequivocally across the board. Social Media users are required to learn and aware of the repurcussions of harming the dignity of an individual let alone threatening, abusing and running a smearing campaign against the journalist in the line of their duty.

It is her profession to present the facts as they are and this duty of her should be respected irrespective of personal inclination and associations. 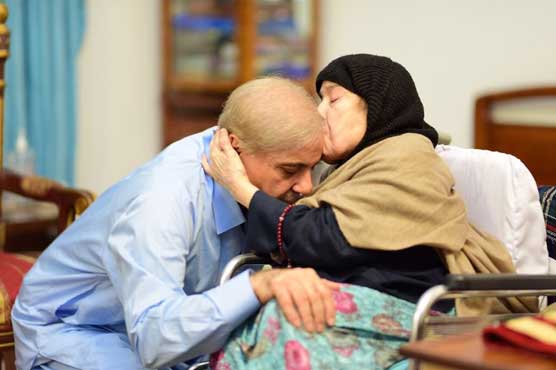 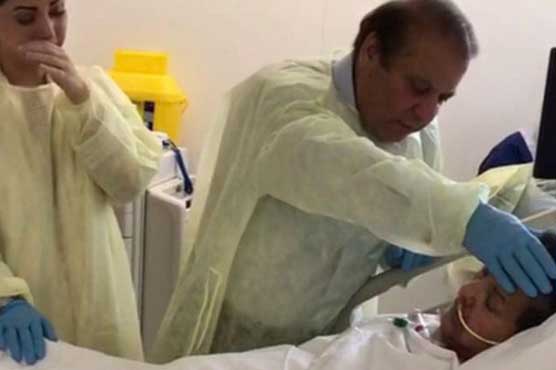 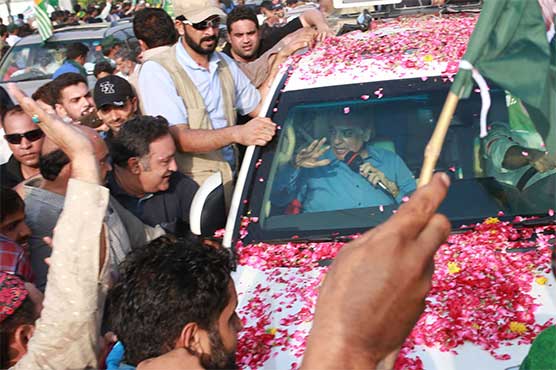