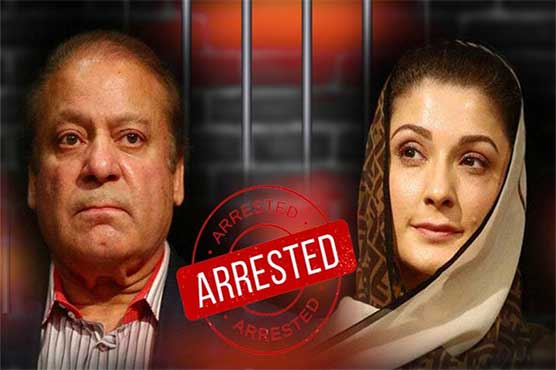 LAHORE (Dunya News) – Former prime minister and Pakistan Muslim League-Nawaz (PML-N) supremo Nawaz Sharif and his daughter Maryam Nawaz who had been arrested by the National Accountability Bureau (NAB) minutes after they landed at Lahore’s Allama Iqbal International Airport have been shifted to Adiala jail.

Stringent security arrangements have been made in and around the prison.

The sentences, delivered in absentia, against Nawaz Sharif and his daughter who is widely seen as his political heir, have dealt a blow to their Pakistan Muslim League-Nawaz (PML-N) party. Nawaz and Maryam were served with a legal warrant as soon as they entered Pakistan s airspace.

Earlier, the PML-N supremo and his daughter made a brief stay at the Abu Dhabi airport where their flight was delayed for nearly three hours. They landed at Lahore s Allama Iqbal International Airport at 9.10 pm IST via Etihad Airways flight EY243.

They were flown to Rawalpindi in a special aircraft and the aircraft will reach Islamabad’s Benazir International Aiport in 40 minutes. The government has left no stone unturned to ensure the arrest goes as smoothly as possible. The Punjab government imposed Section 144 (unlawful assembly) in Lahore.

Security was tightened across the city and roads leading up to the airport were blocked to prevent PML-N workers from reaching there. Around 10,000 security personnel were deployed throughout the city to maintain law and order. Internet and mobile services were also suspended.

The ex-premier s son-in-law is currently serving his one-year prison sentence on the same charge, which stems from the purchase of luxury apartments in Britain that the court said were bought with illegally gotten money.

Sharif is expected to appeal his conviction and seek bail against the 10-year jail term. Ahead of his return, police swept through Lahore, arresting scores of Sharif s PML-N workers to prevent them from greeting him at the airport.

In a video message reportedly from aboard his aircraft en route to Pakistan, Sharif said he was returning knowing he would be taken directly to prison.

Pakistan is to hold general elections on July 25 and Sharif’s political party is facing numerous campaign challenges. Under these circumstances, Sharif’s announcement has excited workers of his party across country.

On the other hand, some surveys suggest that Sharif’s PML-N is doing great in the run up to the elections. A survey by an independent consultant namely Gallup Pakistan put PML-N on top with 26 percent as compared to Imran Khan’s PTI with 25 percent. “PML-N will definitely gain following Sharif’s return who is undoubtedly country’s most popular and senior politician.”

Following is the chronology of the major events leading to his arrest:

April 4, 2016: The International Consortium of Investigative Journalism publishes the Panama Papers, exposing tax evasion by the world s elite through off-shore accounts and shell companies. The documents include the name of the Sharif family.

April 5, 2016: Sharif sets up a judicial committee to investigate the allegations, denies charges.

April 26, 2016: Opposition parties reject the judicial commission set up by the government.

November 1, 2016: The Supreme Court decides to pursue a case related to Nawaz Sharif.

November 7, 2016: PML-N submits Qatari prince s letter to the Supreme Court containing information about the London flats that were at the centre of the Panama Papers scandal.

April 20, 2017: The Supreme Court orders formation of a joint investigation team with a split 3-2 verdict to probe the corruption charges against Sharif.

May 22, 2017: The joint investigation team presents its first bi-weekly report to the Supreme Court.

May 24, 2017: The joint investigation team sends questionnaires to Sharif and his two sons - Hussain and Hassan.

June 13, 2017: The joint investigation team submits report to the Supreme Court on obstructions to its work, blames government institutions for "creating impediments in the collection of evidence".

June 15, 2017: Sharif appears before the joint investigation team for questioning, becoming the first sitting Pakistan prime minister to appear before any investigating agency.

July 7, 2017: Former Qatari premier Sheikh Hamad bin Jassim bin Jaber Al-Thani sends a letter to the joint investigation team, asking it to record his statement at his palace before submitting its final report to the Supreme Court.

August 15, 2017: Sharif files three separate appeals in the Supreme Court to review its verdict in the Panama Papers case that resulted in his disqualification.

September 14, 2017: Sharif and his children summoned by an anti-graft court to appear before it on September 19 in two more corruption cases.

September 15, 2017: The Supreme Court dismisses the review petitions filed by Sharif, his children and Finance Minister Ishaq Dar, challenging his disqualification in the Panama Papers scandal.

September 26, 2017: Sharif for the first time appears before an accountability court to face the corruption charges filed against him by the National Accountability Bureau in the Panama Papers scandal.

October 3, 2017: Sharif re-elected as the president of Pakistan s ruling PML-N party after Parliament passed a controversial bill, paving the way for the ousted prime minister s return to politics.

October 26, 2017: Pakistan court issues warrant for Sharif after he fails to appear.

July 12, 2018: Sharif and Maryam leave from London for Pakistan.

July 13, 2018: Sharif and Maryam arrested on their arrival in Lahore.

Elections 2018: Social Media a necessity for all political parties? 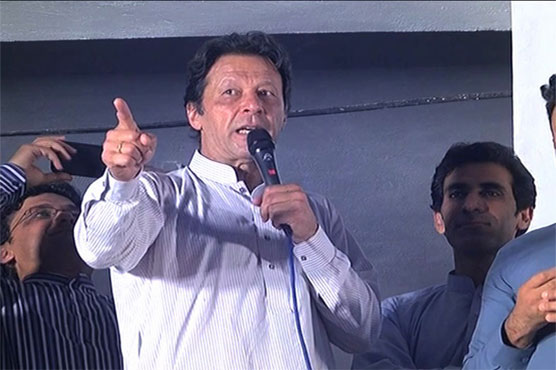 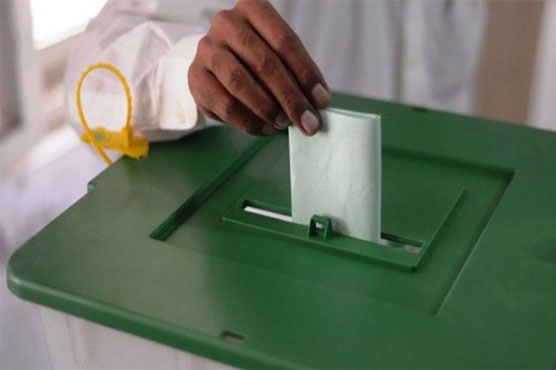