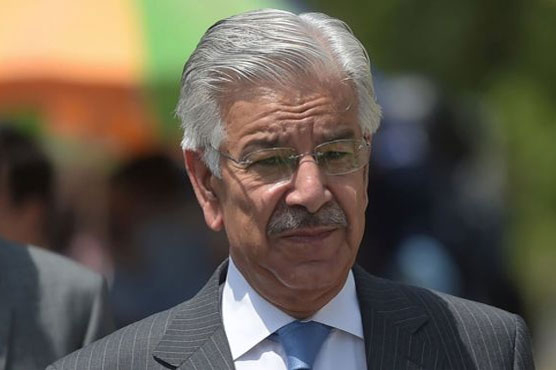 Earlier, Asif had submitted company’s letter and additional documents. The letter states that full-time presence of Khawaja Asif wasn’t mandatory under consultation agreement. “Consultation from Kh Asif was either sought through telephone or during his visit to Dubai”, read the statement of the letter. The company further stated that its legal member was ready to appear before any court in Pakistan in Kh Asif disqualification case.

It is worth here to mention that Dar had lost elections to Asif in May-2013. The PTI leader moved court against Asif relying on apex court’s landmark July-28 judgment pertaining to receivable salary under which the SC had ousted ex-premier Nawaz Sharif.

Dar in his petition had alleged that Asif was entitled to draw a salary which fell under category of receivable asset; however, since he did not declare it in the nomination form while contesting the 2013 general elections from NA-110, he did not qualify to remain a member of the National Assembly.

The 35-page verdict wil be sent to the Election Commission of Pakistan to beging proceedings of disqualification of Khawaja Asif.

Reacting to the verdict, Khawaja Asif has announced that he will challenge the verdict in the Supreme Court of Pakistan.

Following the ouster of Nawaz Sharif from the premiership of the country last year, an article of the Constitution of Pakistan has come in the spotlight – Article 62, which deals with the eligibility of a parliamentarian.

Read here: What is Article 62?

According to Article 62, a person shall not be qualified to be elected or chosen as a member of Majlis-e-Shoora (Parliament) unless-

He is a citizen of Pakistan

He is sagacious, righteous and non-profligate, honest and truthful, there being no declaration to the contrary by a court of law.