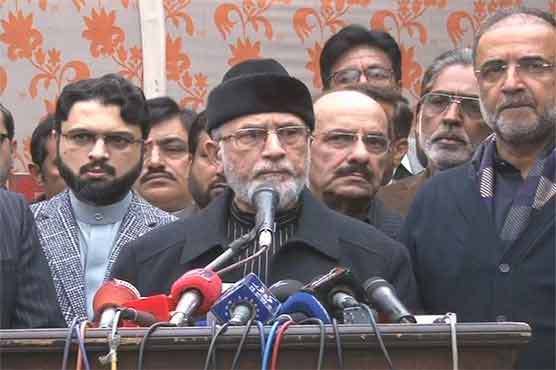 LAHORE (Dunya News) – Tahirul Qadri announced on Thursday that his party will hold protests from January 17 till they demolish the PML-N government.

After the meeting of leaders from several opposition parties, the Pakistan Awami Tehreek (PAT) chief briefed the media saying they will stage sit-in on the Mall Road in Lahore. He told that the opposition parties have decided to protest against the Model Town incident and Kasur tragedy – where innocent 7-year-old was raped and murdered.

He said, “Opposition parties will protest till justice is provided in both these cases.”

The PAT workers will hit the roads on January 17 at 12pm “to start public protest for the democracy”.

PAT chief told that both Imran Khan and Asif Zardari will attend the protests, adding that several other leaders from the opposition parties will be there to raise their voices against the brutality of the PML-N government. He stated that he is confident that all leaders of the political parties will come to express solidarity with the martyrs of the Model Town incident.

He appealed to make Punjab CM Shehbaz Sharif and provincial Law Minister Rana Sanaullah as OSD in the Kasur tragedy.

Steering committee of opposition parties over Model Town tragedy had agreed to launch protest movement against ruling PML-N on January 17 with Qadri claiming that the government would dissolve.