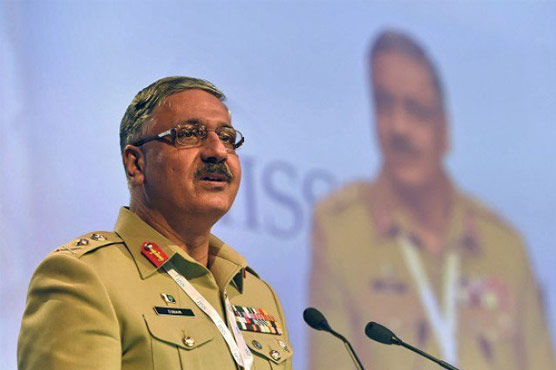 He was speaking at an international conference on the topic of “Regional Dynamics and and Strategic Concerns in South Asia” organized by Islamabad Policy Research Institute (IPRI) in collaboration with Hanns Seidel Foundation (HSF).

He said South Asian region was defined by the volatile nature of Pakistan-India relations.

The resolution of Kashmir issue was important to reduce any chances of strategic miscalculations, he noted.

Gen Zubair said in Asia, future prospects of global peace and prosperity would be determined, adding United States and China had a central role to play in influencing geo-strategic direction of the region.

He said global powers had an interest in the region due to their grand designs, adding South Asian region had the lowest rank on the human development index.

He pointed that collective narratives were being used to influence state behavior.

He said Afghanistan was important for regional connectivity and a gateway to Central Asia.

Instability in Afghanistan hampered the path to regional economic integration, he stated.

He said the reasons for instability in Afghanistan were violence, ethnic divisions, weak governance, warlordism and drug trafficking.

Pakistan will remain friendly to Afghanistan, he said adding conflict in Afghanistan affected Pakistan, which sought a just and enduring closure on Afghanistan issue.

Talking about India, Gen Zubair said India was committing atrocities in occupied Kashmir and had a belligerent attitude towards Pakistan.

He said 7,700 Kashmiris had partially lost their eyesight because of use of pellet guns.

Only in the year 2017, India committed 1200 ceasefire violations along the Line of Control (Loc), the highest in the last ten years, he told.

President IPRI ambassador Abdul Basit said the primary objective of Pakistan’s foreign policy was to have peace in the region and beyond.

“We cannot fully undertake our economic agenda without peace in the region.”

He said Pakistan and Afghanistan should stop mutual recriminations and serious efforts should be made for moving forward the process of reconciliation.

Abdul Basit said Pakistan wanted to have normal relations with its neighbours.

“We want to hold dialogue with India on all outstanding issues including Jammu and Kashmir.”

As a responsible nuclear state, Pakistan was not interested in an arms race in the region, he stated.

In his remarks, Charge d affaires of Germany embassy Dr Jens Jokisch said confrontation could be avoided through mutual engagement.

He said tensions could be resolved through constant dialogue, adding South Asian region needed confidence building measures and “we have to create a win win situation for all."