Zardari trying to please someone by abusing me, says Nawaz Sharif 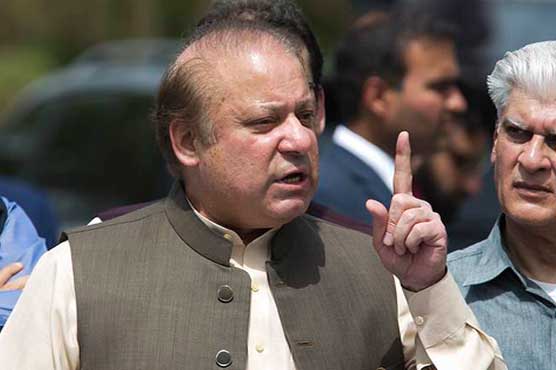 Nawaz Sharif said that PML-N struggled for the freedom of judiciary.

ISLAMABAD (Dunya News) – Ex-prime minister Nawaz Sharif on Friday rejected reports about signing any National Reconciliation Ordinance (NRO) and said that he has always tried to put the country on the path of development.

Talking to media outside accountability court, Nawaz Sharif lashed out at Pakistan Peoples Party (PPP) co-chairman Asif Ali Zardari and said that he is abusing me to make someone else happy. He asserted that Pakistan Muslim League-Nawaz (PML-N) struggled for the freedom of judiciary.

I am being punished for initiating China Pakistan Economic Corridor (CPEC), restoring peace in Karachi and overcoming load shedding, he added.

To another question about the political parties’ reactions towards the ongoing accountability, he said all democratic powers should join hands at this juncture.

Arriving at the Punjab House, the former PM chaired consultative meeting with PML-N leaders during which various issues including ongoing political situation and future strategy were discussed. The participants also talked on the NAB references.

Sharif returned home on Thursday. He had been in London with his wife who is undergoing cancer treatment.

Nawaz Sharif not among those who run away from accountability: Marriyum