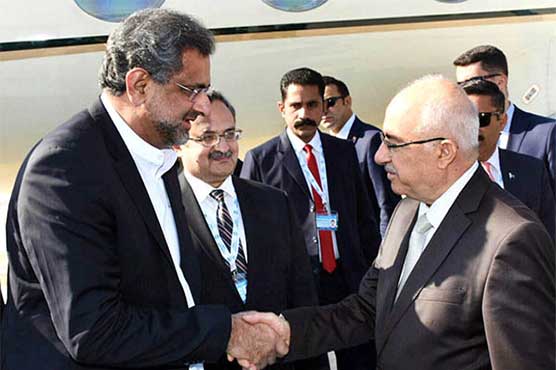 The premier was received by Deputy Governor of Istanbul Mehmet Ali Ulutas.

ISTANBUL (APP) - Prime Minister Shahid Khaqan Abbasi was accorded a very warm welcome as he arrived here Thursday to lead Pakistan’s delegation at the 9th D-8 Summit being held in this historic Turkish city from October 19 to 21.

He was received at the Ataturk International airport by Deputy Governor of Istanbul Mehmet Ali Ulutas. Ambassador of Pakistan in Turkey Muhammad Syrus Sajjad Qazi and senior embassy officials were also present.

With Pakistan as the current chair of D8, an organization of eight developing nations including Bangladesh, Egypt, Indonesia, Iran, Malaysia, Nigerian, Pakistan and Turkey, was established in 1997.

Pakistan assumed chair at the 8th Summit of D-8, held in Islamabad in November 2012. Pakistan continued to hold the Chair beyond the normal period of two years. During Islamabad Summit in November 2012 two landmark documents were signed: (i) the D-8 Charter and (ii) Global Vision.

Prime Minister Abbasi will hand over the chairmanship of the D-8 Summit to Turkey. The Istanbul Summit is expected to adopt a Declaration and a Plan of Action.

The Istanbul Summit will, inter-alia, be an occasion to celebrate the 20th Anniversary of the Organization.

The Prime Minister, besides addressing the 9th D-8 Summit on Friday, was expected to interact with the leaders of D-8 Member States on the sidelines of the Summit.

Foreign Minister, Khawaja Muhammad Asif, who was already in Istanbul, attended the 17th Council of Ministers meeting that preceded the Summit.

The organization has a combined GDP of $3.7 trillion and includes more than one billion people — around 15 percent of the world’s population.