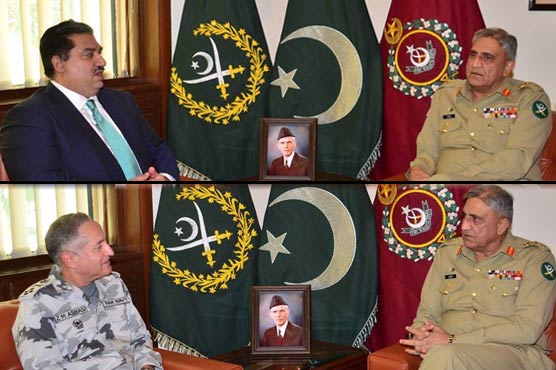 Talking to Admiral Zafar, Gen Bajwa congratulated him after taking the command of Naval Chief and lauded the efforts of Pakistan Navy in maintaining maritime security. Both discussed the matters of mutual concern. Earlier, on arrival at GHQ, CNS laid floral wreath at Yadgar-e-Shuhada and offered fateha for martyrs of Pakistan, according to ISPR.

On the other hand, Defence Minister Khurram Dastgir also arrived in Rawalpindi to meet Army Chief. According to ISPR release, matters related to defence and security situation in the country were discussed in detail. “Prior to the meeting, the Minister was also updated on Security situation at Military Operations Directorate,” the media statement said.

Rangers were deployed at NAB court amid security threat: army