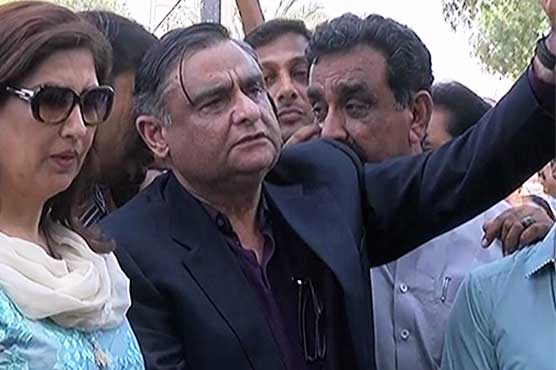 Dr Asim said he will fight the allegations while living in the homeland.

Talking to media on his arrival from London, Dr Asim said that National Accountability Bureau’s (NAB) hints are proved to be wrong as he has returned to Pakistan to face cases against him.

He also lashed out at former PM Nawaz Sharif and said that PPP will ruin all his plans of making greater Punjab.

Dr Asim further said that he is a member of PPP and has not been taught to leave the country due to cases. He said he will fight the allegations while living in the homeland.

It is worth mentioning here that the Supreme Court (SC) had annulled Sindh High Court’s judgment and granted permission to Dr Asim to leave the country for one month.

The apex court had instructed Dr. Asim to submit surety bonds worth Rs6 million and instructed government to make his return certain.

Let it be known that Dr Asim had filed petition in SHC to remove his name from Exit Control List (ECL) citing medical reasons but the plea was turned down. Later, a review petition was filed in SC against SHC’s verdict following which permission was granted to him.

Dr Asim is facing several charges including alleged corruption of Rs460 billion, and facilitating and treating terrorists at his medical facility.