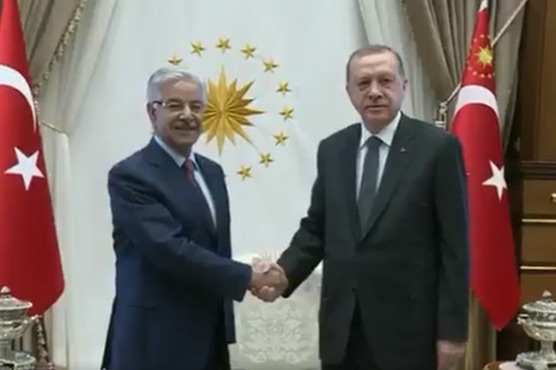 The Turkish leadership expressed best wishes for Prime Minister Shahid Khaqan Abbasi. Turkish PM Yildirim said that his country appreciates the sacrifices made by Pakistan in war against terrorism, adding that both countries have meaningful relations.

He acknowledged that Pakistan made the highest number of sacrifices to fight terrorism in their region, requesting the international community to realise the sacrifices of over 60,000 thousand Pakistanis. Turkey supports Pakistan’s stance in Afghanistan security, he further stated.

Khawaja Asif talked about the regional security, trade and matters of mutual interest with the Turkish leadership. The meeting was also attended by their Foreign Minister Mevlut Cavusoglu. He embarked on a one-day official visit to Turkey on Tuesday to discuss the US policy review regarding Afghanistan and South Asia, apart from US President Donald Trump s allegations of safe havens in Pakistan.

Earlier, Asif had called on Iranian President Dr. Hassan Rouhani and discussed strengthening of brotherly relations between the two countries rooted in common history, culture and people to people ties and reaffirmed the mutual desire to strengthen bilateral cooperation.

Khawaja Asif to embark on Turkey visit from Tuesday