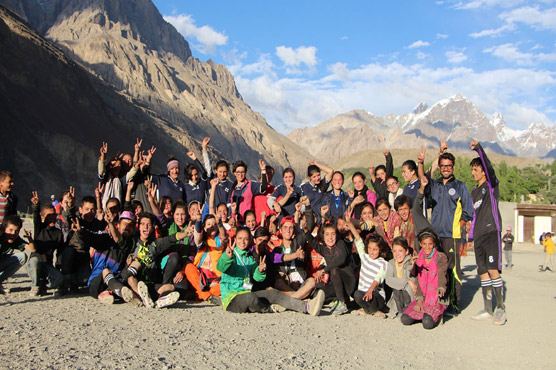 In a small village of Shimshal, Inayats started a football team for young girls. Photo: The Guardian

Shimshal is a small village in one of the most northern parts of Pakistan, the highest settlement in the Hunza Valley at 3,800 metres above sea level. A short distance from China’s most western border, it has a population of about 2,000 inhabitants.

City life is a world away; dusty Shimshal is a 16-hour drive from Islamabad, 20 from Lahore. It is not the sort of pocket where one would expect to find an appetite for women’s football. Yet girls are queueing up to take part.

Karishma Inayat and her family are from Shimshal and, though they have left the village for Lahore, they maintain a strong affinity with the area and its residents.

“My father used to work in Lahore. He brought me and my family to the city so we could continue our studies and get educated,” she says.

“My mother was a nurse but she left her job so that we could move. My father started bringing children from Shimshal to Lahore so that they could study and get an education. He brought five or six children and eventually that number started to increase as people wanted their children to study in Lahore. My father brought his family too, people that could not afford the fees to study.”

Karishma started playing football in 2012, except it was not her first choice. “I was not that interested in football. I was more interested in cricket but in Pakistan girls do not have much opportunity to get to a good level so my father took me and my two sisters to a football ground.”

Her father told them that, if they worked hard, they could represent their country one day. So work hard they did. “We played for two or three clubs before joining a national-level club. We played so many national-level games for them and then in 2016 me and my sisters went to Dubai to represent Pakistan in the Jubilee Games.”

While she and her sisters were competing in Dubai, Karishma’s brother had returned to Shimshal. Clearly influenced by his father, he had the idea of bringing football to girls in the village. Joined by a cousin, and with a small amount of money for equipment, he ran a tournament in 2016. “It was a great event and around 70 girls participated. So we thought why don’t we create a proper platform where girls can come and get to know how to play football and get involved,” says Karishma. 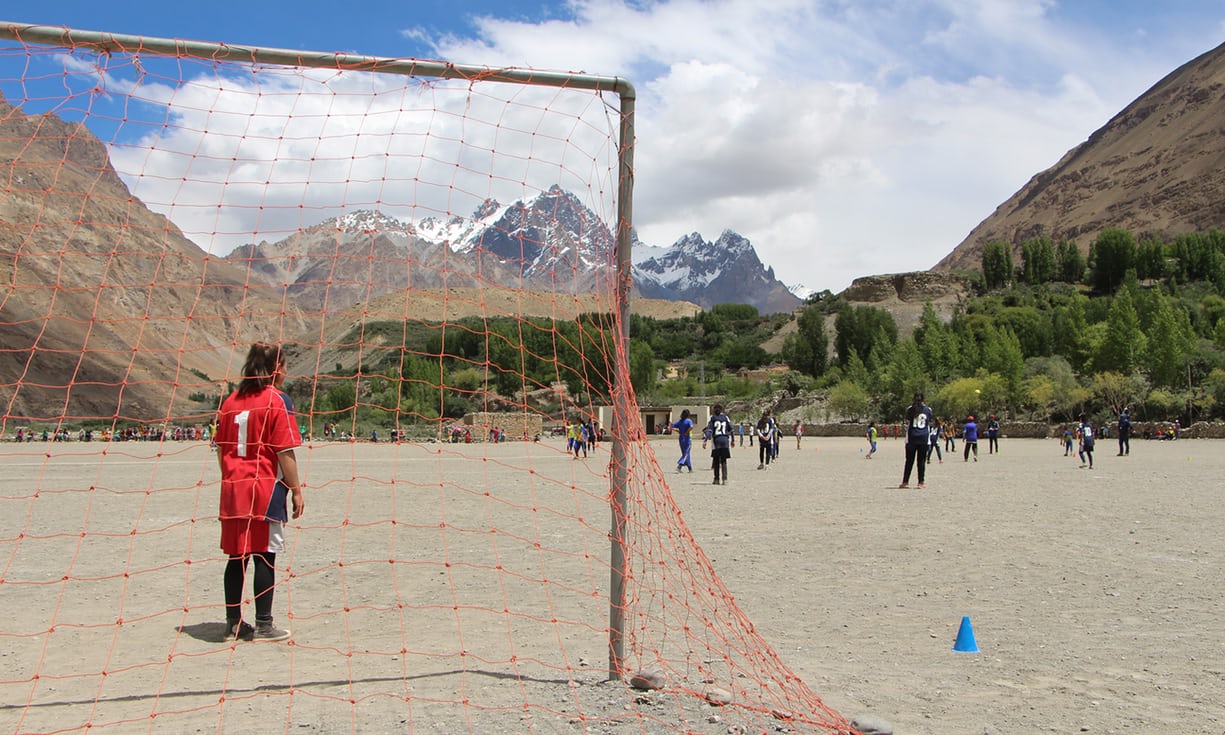 Girls play football on a dusty pitch in Shimshal. Photo: The Guardian

They were motivated by the social pressures faced by young girls in the region. “The main problem in my village is that when girls are 18-19, and when their parents aren’t able to get them educated or pay their fees, they think it’s a good idea to get them married so their husband can manage the rest of their life.

“We want this to be finished. We want to give them a purpose. Some can get admission to university on sports scholarships.” That is the goal, Karishma stresses, “instead of getting girls married at early ages we should be giving them a platform to do more, a platform where they can show off their hidden talents.”

In this remote village football is being used to provide a way out, an alternative, and to give young girls and women aspirations beyond the valley.

As the small group of 15- to 20-year-olds set about setting up Al-Shams Women FC, 19-year-old Karishma and her cousin attended a session hosted by Women Win and the US embassy in Islamabad. “We presented our idea there and they were very encouraging. We then tried to get sponsorship but no one was interested. We asked local businesses but they all thought it was a bad idea; ‘How could girls in the north play football?’”

Parents in the region want their girls to be involved in sport and education. Photo: The Guardian

Undeterred by the lack of funding, the team collected small donations here and there, dipping into their own pockets too to buy equipment and a few kits, enough to get them started. “We went there in June and we started training the girls. When we arrived at the ground there were girls already standing there waiting for us. They had heard that we were going to be teaching football. On the first day we had 90 girls with us, then it increased.”

Despite what some may presume about the country and region Karishma says that “in Pakistan people are very supportive.

“The best part about Shimshal and areas in the north is that they are very open-minded people and they don’t care about what people say.”

They have found parents want their daughters to be engaged in sport and education and are open to finding a route away from their historically mapped-out marriages. They have offered something new and it has been progressively embraced by the community.

The young team was unable to keep up with demand. “We couldn’t manage, there were over 100 girls. There were parents that bought their kids to our houses so that we would register them for the tournament. There were so many left out because we couldn’t register more than 100 players.”

Barriers have been logistical and financial. National and regional structures do not exist in a way which allows them to get their girls competing. “Parents are very supportive but the problem is a lack of opportunities. The opportunity for us to get them playing in national-level or regional-level games doesn’t exist.”

The joy of scoring is the same the world over. Photo: The Guardian

Sponsorship is the next step. With the initiative continuing they hope there will be more interest. “The main reason why people wouldn’t provide sponsorship was that they thought it was just one tournament, then that would be it. But out of 100 girls we somehow managed to select 18-20 girls. We are training them. We have selected a team and we want to bring them to Islamabad or Lahore, or wherever is possible, so they can play on grounds.”

It may seem basic but in Shimshal, surrounded by picturesque snow-capped mountains, there are no proper pitches.

“They have to play on the sand and there are so many rocks,” says Karishma. Watch videos of their tournament and dust flies high with every kick and movement. “We want them to feel what it’s like to play on a proper ground and, maybe if they are good, they will have the chance to be selected by some clubs in the towns and cities.”

What Karishma and her young relatives are doing is impressive to say the least. We often talk about how universal football is and their project shows the extent of that. Football is more than a game and it can be used to influence society, attitudes and young lives in a concrete way in even the most distant corners of the world.

The story originally appeared in The Guardian.