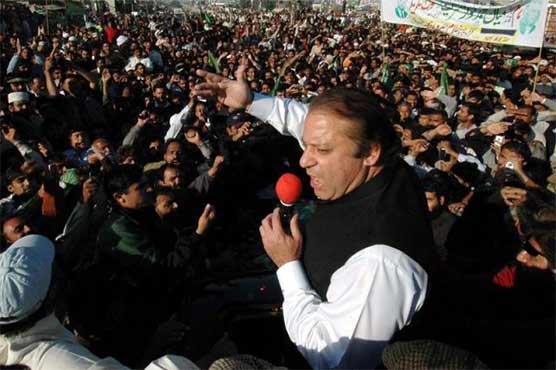 Nawaz Sharif will embark on his journey from Punjab House in Islamabad to Lahore via GT Road today.

ISLAMABAD (Dunya News) - Former prime minister Nawaz Sharif will embark on his journey from Punjab House in Islamabad to Lahore via the Grand Trunk Road (GT Road) today (Wednesday) at 9 AM.

According to details, Pakistan Muslim League-Nawaz (PML-N) caravan led by Nawaz Sharif himself will first reach D-Chowk from Punjab House. The PML-N convoy will then head towards Faizabaad through Blue Area and Zero Point. It will enter Rawalpindi via Murree Road and then head towards Lahore via the GT Road.

All arrangement have been finalized and the local administration has granted permission for the PML-N rally. All the route of PML-N rally from Islamabad has been decorated with banners, party flags and Nawaz Sharif’s posters.

The local administration has also devised security plan for the PML-N rally. Over 6,000 security personnel will the deployed while all the areas around the route of the PML-N rally will be sealed.

Former prime minister will travel from Islamabad to Lahore in bullet-proof car. He has been advised to address the party workers from his car.

Meanwhile, helipads have also been built in Gordon College in Rawalpindi and in ten other colleges of the district including Rawat and Gujar Khan to avoid any untoward incident.

GT road rally: Nawaz not to step out of bulletproof car

IHC reserves decision on maintainability of petition against Nawaz's rally