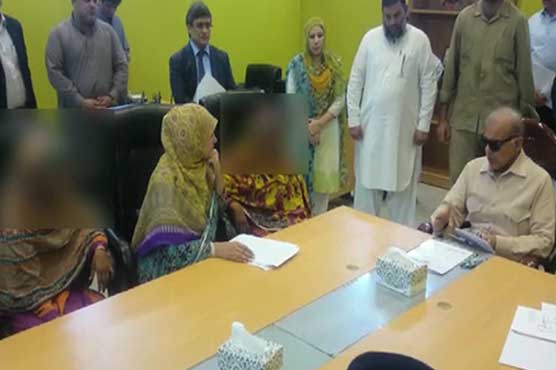 CM expressed resentment over the performance of police officers.

MULTAN (Dunya News) – Chief Minister of Punjab (CM) Shehbaz Sharif on Thursday visited Women Crisis Centre in Multan and had a meeting with the rape victims and their families.

During the visit, Punjab CM formed a three-official committee and directed to submit report in 72 hours. He also expressed resentment over the performance of police officers and said that they neglected the issue and lodged case after eight days.

Earlier today, four prime suspects who were involved in the rape of a 17-year-old girl on the orders of Panchayat were arrested by police.

The suspects included rapist Ishfaque and the one who gave the order - Haq Nawaz alongwith the girl’s brother Umer Wada and Saeed Numberdar.

The number of arrested suspects has now risen to 24.

A suo moto notice was also taken by the Chief Justice of Pakistan Mian Saqib Nisar. He has summoned an instant report in this reagrd from Punjab IG.

The incident occurred earlier this month in the neighbourhood of Raja Ram in Muzaffarabad, a suburb of the central city of Multan.

"A jirga (village council) had ordered the rape of a 17-year-old girl as punishment, as her brother had raped a 12-year-old," said Allah Baksh, a local police official.

He said the village council was approached by a man who complained that his 12-year-old sister had been raped by their cousin.

The council then ordered the complainant to rape the sister of the accused in return, Baksh said -- an order which was duly carried out.

The allegations were confirmed by Rashid Taheem, the police officer heading the investigation.

"Both the parties had filed cases of rape against each other at the local police station after the incident that happened last week," he said.

Jirgas, or village councils formed of local elders, are a traditional means of settling disputes in Pakistan’s rural areas. But such councils are illegal and have been under fire for their controversial decisions, especially regarding women.

A jirga was involved in one of South Asia’s most infamous cases of sexual violence against women when, in 2002, it ordered the gang rape of a woman called Mukhtar Mai after her brother was falsely accused of rape.

Mai made the unusual decision to defy her rapists and take them to court. Her attackers walked free but she went on to become a high-profile women s rights activist.

Her story inspired an opera, "Thumbprint", which opened in New York in 2014 and premiered in Los Angeles last month.

Lahore: 10-year-old girl choked to death after rape in Shalimar