IOK in a state of complete lockdown on Wani's death anniversary 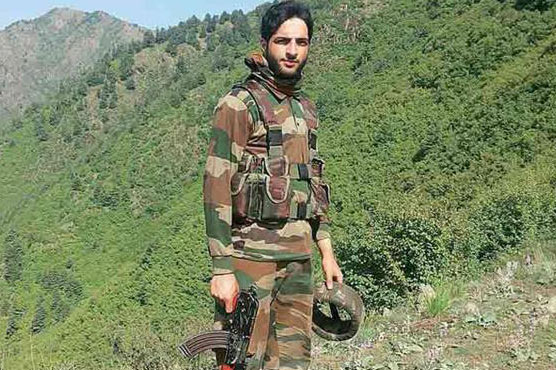 (Web Desk) - India has completely locked down and imposed a widespread curfew in the Indian Occupied Kashmir on Saturday, with the internet services cutoff and thousands of Indian troops being deployed, as the disputed region marks the first death anniversary offreedom fighter, BurhanWani.

Both mobile and broadband internet services have been suspended across Kashmir since Thursday night, on Indian police orders.

Mirwaiz Mohammad Umar Farooq, Chairman of Awami Action Committee and All Parties Hurriyat Conference, speaks on the suspension of internet services in Kashmir

The death of the 23-year-old freedom fighter, which had a huge following on social media, sparked an outburst of emotional grief and anger amongst the residents of Kashmir Valley. The grief stricken protestors spilled into the streets and led to months of clashes with Indian security forces.

As curfew and severe restrictions are imposed all over, #Kashmir today remembers #BurhanWani his associates & over 120 civilians Killed....

According to the villagers the current restrictions imposed were the strictest they had seen, they were told that they would be shot if they left their homes.

Kashmir has faced an outburst of angry protestors since the Indian government shot and killed BurhanWani a year ago.

According to AFP, as the anniversary approached, freedom fighter leaders, who are either confined in their homes or jailed, called for a week of protests from Saturday to mark Wani’s death.

Wani’s hometown Tral’s roads were completely blocked, seizing all the commuters to travel between villages in that area."I have never seen restrictions of this magnitude before," said one local resident who asked not to be named.

Almost a 100 people lost their lives in the months following Indian police raids in the Valley after Wani’s death, and countless protesters sustained serious eye injuries from the pellet guns used by the Indian government forces to control the protests.

DG ISPR Major General Asif Ghafoor tweeted on behalf of the Chief of Army Staff, stating that the sacrifices of Kashmiris including Burhan Wani were a testament of their resolve to fight against Indian atrocities.

Across twitter many Pakistanis wrote on the first death anniversary of Burhan Wani.

Sacrifices of Wani against Indian atrocities are testimony of his resolve: COAS