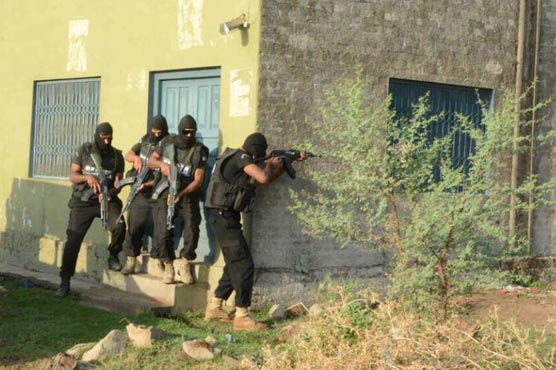 RAWALPINDI (Dunya News) – Operation Radd-ul-Fasaad in underway nationwide and has yielded numerous achievement to ensure peace and strengthen the security. Security forces, with the help of intelligence agencies, have conducted intelligence based operations (IBOs) and search operation throughout several regions of the country.

During the IBOs in Mathra village and Peshawar district of Khyber Pakhtunkhwa (KP), the security forces killed three terrorists during exchange of fire. All three terrorists belonged to dangerous terror outfit that was planning to spread unrest in the country ahead of Eid-ul-Fitr. Police and armed forces conducted joined search operation. One soldier as well as three policemen were injured in the cross firing.

As far as the security situation of Punjab is concerned, a security alert was announced on Friday when terror attacks occurred in Parachinar, Quetta and Karachi. Punjab Rangers, police, Counter Terrorism Department and security agencies carried out IBOs and search operations in Jarranwala, Gojra and Faisalabad. At least 12 suspected terrorists were arrested and illegal weapons were recovered from them.

According to ISPR, security forces destroyed three camps of terror outfits in Dera Bugti and Kahaan, where one terrorist belonging to banned organization was taken into custody. Two IEDs were defused after seizure.