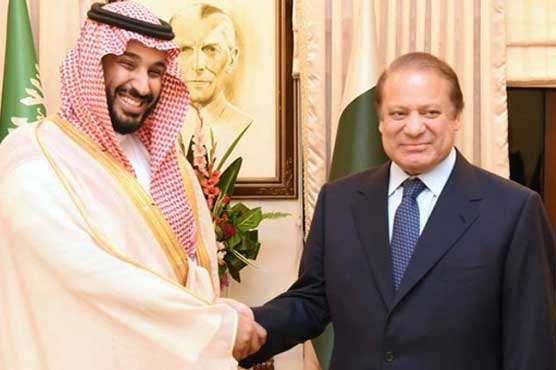 The premier conveyed his most earnest wishes for the peace, stability and prosperity of the Kingdom.

“I convey to you, on behalf of the government and people of Pakistan as well as on my own personal behalf, our heartfelt felicitations and warmest wishes on your appointment as the Crown Prince of the Kingdom of Saudi Arabia”, the Prime Minister said in his congratulatory message to the Saudi Crown Prince.

The Prime Minister expressed great confidence that under the most dynamic and visionary leadership of the Crown Prince, the Kingdom would attain even greater glory and the brotherly people of Saudi Arabia would prosper even more.

“Pakistan and the Kingdom of Saudi Arabia are bound together by a common faith, shared values, and joint aspirations for the future of the Ummah, I am most confident that the bonds that tie us will become even stronger, and the love between our people will grow even deeper, in the days to come”, the Prime Minister stated.

The Prime Minister also conveyed his most earnest wishes for the peace, stability and prosperity of the Kingdom and people of Saudi Arabia to Mohammad Bin Salman Bin Abdulaziz Al-Saud.