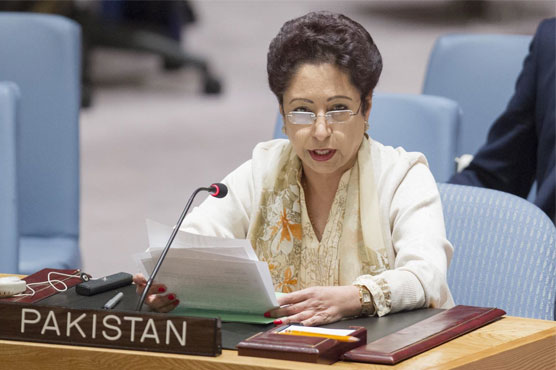 She was expressing her views in a debate on Afghanistan at UN Security Council.

UNITED NATIONS (Dunya News) - Pakistan’s Ambassador and Permanent Representative to the United Nations Maleeha Lodhi has said on Thursday that Pakistan will not allow its territory to be used against any country.

While expressing her views in a debate on Afghanistan at UN Security Council, she stressed that more troops and reliance on a military option in Afghanistan without a political strategy will yield no sustainable results in the war torn country.

She urged that a political solution together with military options in Afghanistan is mutually incompatible.

Maleeha Lodhi asserted that a negotiated peace in Afghanistan has been Pakistan’s consistent position and the consensus of world community.

She said Pakistan is still hosting over two million Afghan refugees and expects gratitude not hostility from the Afghan government.

Maleeha Lodhi notified that safe havens of Taliban exist inside Afghanistan and not outside given the large areas they control there.

She articulated that the two countries have suffered the most from the menace of terrorism and Afghanistan should work with Pakistan to eliminate the threat from the region.

The Pakistani Envoy said that Islamabad strongly condemns terrorist attacks in Afghanistan as nothing justifies murder and mayhem aimed at civilians.