The sun will rise perpendicularly over the Kaaba at 2:18 PST, during the noon prayer.

LAHORE (Web Desk) – Muslims can mark the exact Qibla direction on May 27 as the sun will shine at the head of Khaana Kaaba, reported Alarabiya English.

According to the website, the National Research Institute of Astronomy and Geophysics in Egypt has announced that the sun will align directly over the Kaaba at 2:18 PST on Saturday, during the noon prayer. The day also marks the beginning of Ramazan in Saudi Arabia and UAE. 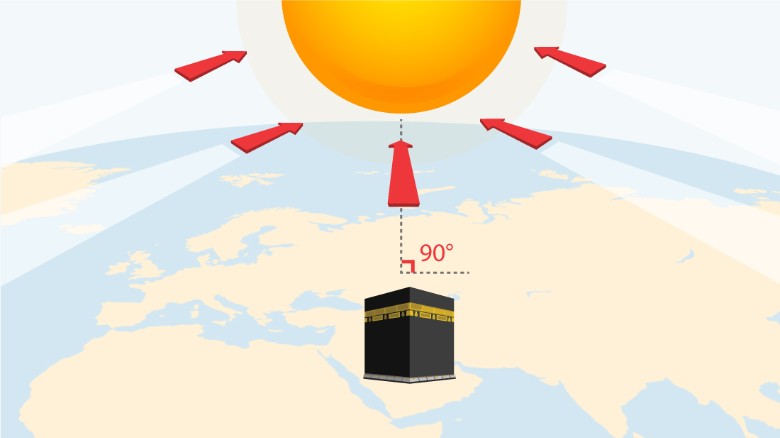 The direction can be  located with the ancient method of observing the shadow of a stick while fixing it on the ground vertically. The shadow line will indicate Qibla direction. The institute’s department in charge of researching the Sun’s activities said in a statement on its official Twitter account that the elevation angle of the sun at the time of the Zuhr prayer will be 89.93 degrees above the Kaaba, that is only 0.07 degrees away from being 100% vertical at 90 degrees.

The phenomenon happens twice a year, the first will be on May 27 and the second on July 15. When the event will occur, the cube-shaped structure, draped in black silk at the center of the world’s most sacred Muslim site, will cast no shadow.