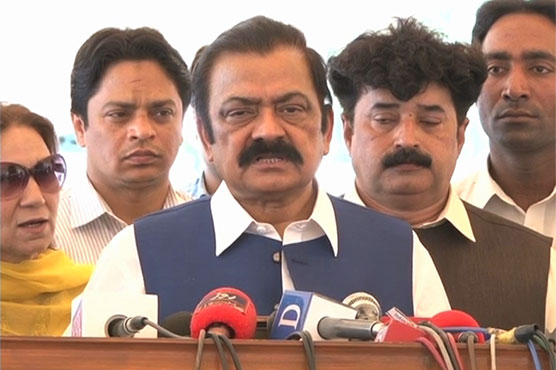 The minister asserted that JIT should not only seem neutral but should act like one too.

LAHORE (Dunya News) – Punjab law minister Rana Sanaullah has said on Thursday that the members of Joint Investigation Team (JIT) who are under the scanner of objection should part ways from the probe voluntarily.

While talking to media outside Punjab assembly, the minister asserted that JIT should not only seem neutral but should act like one too.

He maintained that the JIT members’ who have affiliation with Musharraf and Pakistan Muslim League-Quaid (PML-Q) should separate from the probe themselves.

Sanaullah lashed out at Pakistan Tehreek-i-Insaf (PTI) chief Imran Khan and said that it is now difficult for him to get a safe exit as he has got stuck in the Supreme Court.

He pronounced that significant revelations have been surfaced in Election Commission after which Khan’s survival is difficult.

The provincial minister vowed that Sahiwal Coal Power Project will be a vital milestone for the elimination of loadshedding. He told that 9000MW power will be included in the national grid till March 2018 which will wipe out the country’s blackouts forever.

Pakistan will never be part of alliance against any Islamic country: Rana Sanaullah