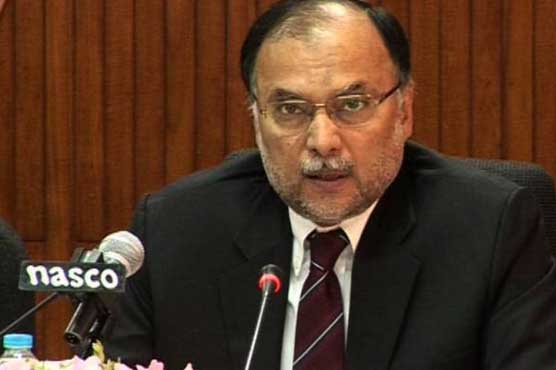 LAHORE (Dunya News) – Minister for Planning and Development Ahsan Iqbal said Monday there are no hidden agreements in China-Pakistan Economic Corridor (CPEC). He insisted that everything was kept transparent in agreement with the neighbouring state.

While talking in Dunya News programme “Nuqta-e-Nazar”, the state minister claimed credible business-related institutions worldwide have expressed confidence in Pakistan’s steady economic growth. “Nothing has been kept secret in CPEC,” he insisted.

He called CPEC ‘a supernatural gift’ for Pakistan while saying that Pakistan’s economic growth was on the decline when PML-N had came into power. He claimed duration of power outages has lessened in Nawaz government which used to be 18 to 20 hours every day earlier.

He said, “Pakistan’s economy is strengthening. We’re trying to control the electricity crisis as energy-related projects are under-construction.”

Ahsan Iqbal went on to discuss the situation of budget 2017-18. He told PML-N government will not increase debts and leave burden of deficit in election year budget as done by previous regimes.

“Our government has augmented tax collection which increased development budget,” he claimed while affirming to have become USD 300 billion economy. He told that the government was focusing on tax revenue in budget 2017-18.