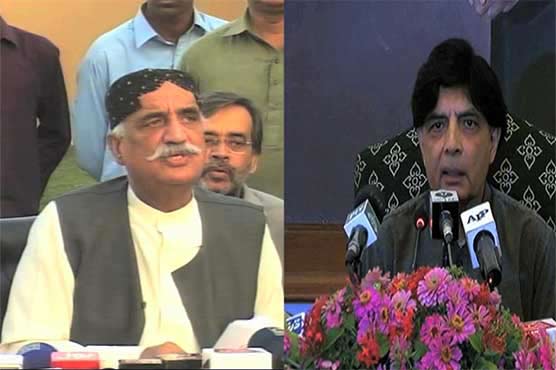 "The journey of Shah from a utility worker to a federal minister is a 'big question mark'."

ISLAMABAD (Dunya News) – Spokesperson for Minister for the Interior, Chaudhry Nisar Ali Khan has criticised Leader of the Opposition in National Assembly, Khurshid Shah on Monday by urging him to take note of Pakistan People’s Party’s (PPP) past and present instead of passing unnecessary statements.

Spokesperson for the minister said that the persons whose performances are "zero" target the federal minister to uplift themselves.

He said that the nation is fully aware of the ‘fact’ that people who are infamous for corruption have become habitual of criticising Chaudhry Nisar.

Minister’s spokesperson demanded off such people to introspect instead of criticising Nisar. Criticism on the federal minister would neither deface the facts nor mislead the people, he added.

He further said that the journey of Shah from a utility worker to a federal minister is a ‘big question mark’.