US Ambassador acknowledges Pak efforts in war on terror 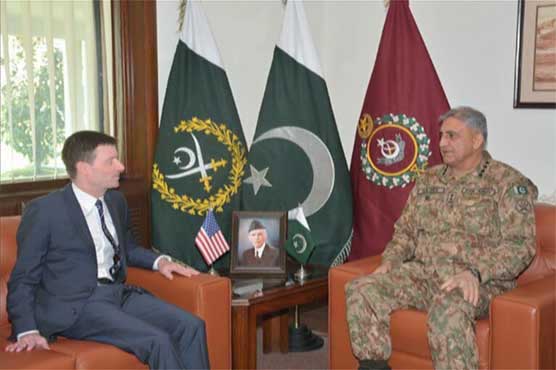 RAWALPINDI (Dunya News/ AFP) – United States (US) Ambassador David Hale called on Chief of the Army Staff (COAS), General Qamar Javed Bajwa on Monday and acknowledged efforts put up by the state in war on terror.

On the occasion, Ambassador Hail acknowledged Pakistan’s efforts to counter extremism and lauded address of the army chief that was delivered on May 18.

General Bajwa had reiterated Pakistan’s stance to not let its soil get used to for terrorism. According to the spokesperson for the US embassy, the army chief assured that Pakistan would never let its soil be used for extremism in Afghanistan.

The meeting of the US Ambassador has come in after US President, Donald J Trump ignored Pakistan’s efforts and sacrifices in war on terror and branded India a victim of terrorism.

During his speech at the first trilateral US-Arab-Islamic Summit, Donald Trump forgot to talk on the sacrifices rendered by the brave soldiers of Pakistan Army despite being given status of frontline ally by US.

He also avoided to appreciate the operations launched by Pakistan to eradicate terrorism and extended condolences to India, declaring it as a victim of terrorism.