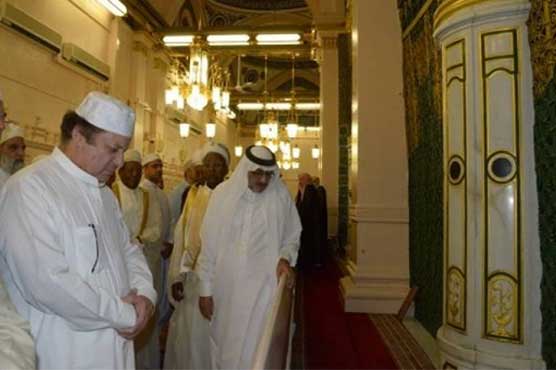 PM Nawaz will pray for peace and prosperity of Pakistan.

RIYADH (Dunya News) - Prime Minister Nawaz Sharif has arrived in Madina from the Saudi capital Riyadh to pay his respects at Roza-e-Rasool (peace be upon him) and pray for peace and prosperity of Pakistan.

Soon after his arrival on Sunday, Prime Minister Nawaz Sharif participated in the first US-Arab-Islamic Summit in Riyadh. The President of the United States and leaders of the Muslim Ummah attended the conference, aimed at countering extremism and terrorism.

During his interaction with Saudi King Salman Bin Abdulaziz, US President Donald J. Trump and other leaders from the Arab and Islamic countries, Prime Minister Nawaz Sharif said Pakistan had a deep commitment to the unity of Muslim Ummah and to the promotion of interfaith harmony and dialogue.

He highlighted that being the frontline state, Pakistan had rendered remarkable sacrifices in the global fight against terrorism.

The rising tide of terrorism and extremism is the most daunting challenge that the world confronts today, he added.

The prime minister also appreciated the leadership of President Trump to make this Summit as his first overseas engagement.

Nawaz Sharif will leave for home on Tuesday.