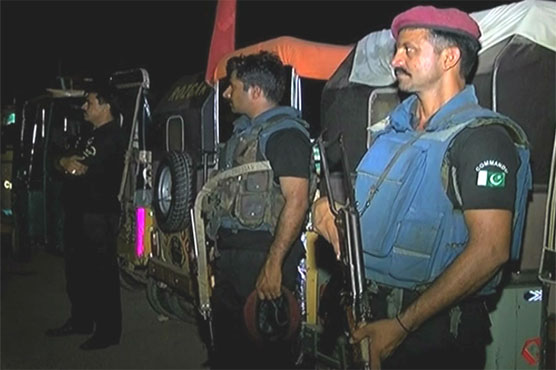 KARACHI (Dunya News) – Crackdown against criminal elements in Karachi continues as police and Rangers conducted a joint search operation in Chanisar Goth area of the city on Thursday and apprehended at least 15 suspects, Dunya News reported.

According to details, police and Rangers conducted a joint search operation in Chanisar Goth on intelligence report that criminal area present in the area.

Al the entry and exit points were sealed before the start of search operation and 15 suspects were taken into custody during house-to-house search.

Police sources said that narcotics and stolen motorcycles were also recovered during the search operation. All the arrested persons were later shifted to police station for further investigation.

Wall chalking in favour of AD Khawaja appears in Karachi

Wall chalking in favour of AD Khawaja appears in Karachi