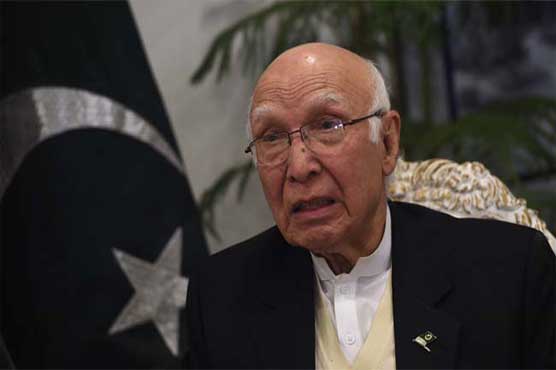 Details in the issue would be provided by the lawyers and the Attorney General, says Sartaj Aziz

ISLAMABAD (Dunya News) – Advisor to the Prime Minister of Foreign Affairs, Sartaj Aziz has said on Thursday that International Court of Justice (ICJ) has not ordered Pakistan to provide India with consular access to Kulbhushan Jadhav but has remarked an opinion.

In his reaction to ICJ’s order to stay Jadhav’s execution, Aziz branded it a routine matter saying that majority of such appeals are entertained by the courts. He said that the decision to provide consular access to Jadhav is yet to be made.

The point to be reviewed is that whether Pakistan’s security is compromised or not if Vienna Convention permits consular access to India.

Aziz further said that details in the issue would be provided by the lawyers and the Attorney General of Pakistan.