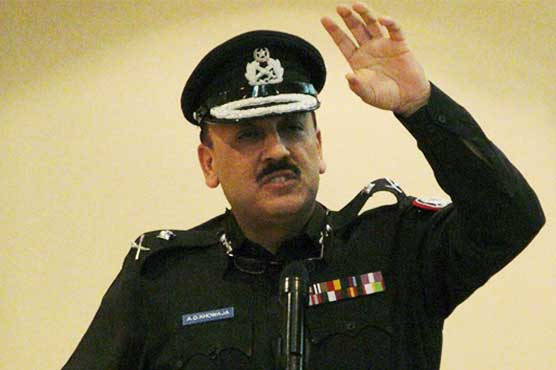 Khawaja said that Sindh government has made him as 'dummy' IG.

KARACHI (Dunya News) – Inspector General of Sindh Allah Dino Khawaja on Wednesday has voluntarily offered to leave his post as it is difficult for him to run IGP office smoothly without active backing from provincial government.

AD Khawaja submitted the reply through his lawyer Shahab Osto in the court, saying that the Sindh government has made him a ‘dummy’ IG. He said appointments and transfers are being carried out in the department without his consent whereas the authorities are also not taking him into confidence on any issue.

The sudden change in Khawaja’s mind amazed everyone, including his own lawyer, whereas several questions were also raised in this regard.

Subsequently, the court directed AD Khawaja to continue serving duties as Sindh IG until the decision and adjourned the hearing till Thursday.

AD Khawaja was removed from his post and Sardar Abdul Majeed Dasti was given the charge by provincial government.

The provincial government had sent three names to latter for the said post and appointed Abdul Majeed Dasti as acting Sindh IG without even waiting for federal government’s reply.

Federal government objected to all three proposed candidates and said they did not own good reputation. Ghulam Qadir Thebu and Khadim Hussain were the other two contenders.

AD Khawaja was appointed as Sindh IG on March 12 last year, but gradually developed a rift with the Sindh government after he refused to appoint constables on quota system and hired them through NTS test.

In December 2016, he was sent on forced leave by Sindh government on the directives of prominent leaders after which he got restraining order on his transfer from the court.