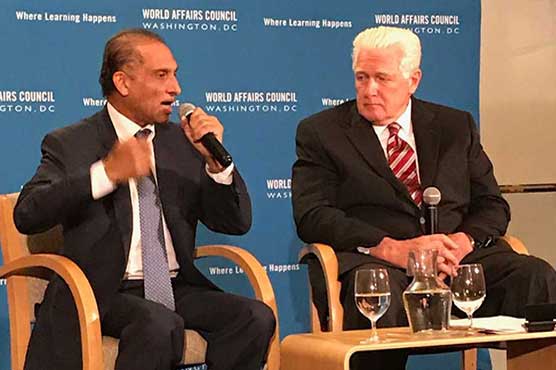 Pakistan is ready for a dialogue with India whenever it is ready, the ambassador said.

WASHINGTON (Web Desk) – Responding to a question related to Pak-India relations while addressing at Ambassador Series Program organized by the World Affairs Council in Washington, Pakistan Ambassador Aizaz Chaudhry said that India has suspended the dialogue process which does not serve any purpose. Rather it further deteriorates the bilateral relations between the two countries.

“Terrorism is a common enemy. Both the countries should cooperate with each other. Pakistan is ready for a dialogue with India whenever it is ready,” the ambassador said.

On a question related to Afghanistan, Ambassador Aizaz Chaudhry said that peace in Afghanistan is our highest priority.

“A stable, prosperous and developed Afghanistan is not only in the favour of Pakistan but the entire region. USA has made massive investment in Afghanistan over the years and would be interested in taking it to its logical conclusion. The first and foremost goal of the US in Afghanistan must be to strengthen Afghan National Security forces. Pakistan wants systematic border management along Pak-Afghan border in order to check the cross border movement of miscreants effectively,” he said.

Ambassador Chaudhry further said that there is a tendency to put blame on Pakistan for failure in Afghanistan which is not true. Afghanistan has multiple problems which is not related to terrorism only. Pakistan cannot be made a scapegoat, he stated, adding that Pakistan firmly believes that a comprehensive approach is required to find an amicable solution of the Afghan problem.

He further remarked that there is no military solution to the Afghanistan issue. A comprehensive political strategy is required.

Commenting upon CPEC and One Belt, One Road Chinese initiative, Ambassador Chaudhry remarked that Pakistan’s good relations with China are not a zero sum game for any other country including the US. Pakistan wants to have a broad-based, mutually beneficial relationship with China and the US at the same time.

Ambassador Chaudhry reiterated Pakistan’s commitment to eliminating terrorism in all its forms and manifestations. He said clearly that Pakistan will never allow its soil to be used against any other country and expects that no other country will allow anyone to operate from there against Pakistan.

Giving his remarks on Pak-US ties, Chaudhry said that Pakistan is looking for a broad-based, sustainable and not a transactional relationship with the US. Pakistan and the US have historic relations spanning over seven decades. Whenever Pakistan and the US worked together in the past, both the countries benefitted and it had yielded positive results, he added.

Ambassador Chaudhry said that bilateral relations between the Pakistan and the US are tremendously important. USA is the largest trading partner of Pakistan. Both the countries have deeper relations with each other in the fields such as Education, Health, Counter Terrorism and Defense.

Almost 50,000 Pakistani physicians are working in the USA at the moment. A million plus Pakistani diaspora in the US is a big asset and is working as a bridge between the two countries. Ambassador Chaudhry underscored that there is a need to enhance cooperation in those areas which are lagging behind.

He said that perceptions about Pakistan are lagging behind the reality of today’s Pakistan. Due to remarkable improvement in law & order situation, all economic fundamentals are moving upwards. The terrorist incidents have reduced significantly which is having salutary effect on our economy. The International Credit agencies have upgraded credit rating of Pakistan from “Negative” to “Stable” and from “Stable” to “Positive” which is a complete break with the past. Pakistan Stock Exchange has emerged as fifth high performer in the World and has crossed 52000 index points which is all time high record in the history of Pakistan.

At the end, Ambassador Chaudhry said that he would like to further deepen the relations between Pakistan and US as both the countries have many commonalities and shared interests.

There is a willingness on both sides to work together, he concluded.