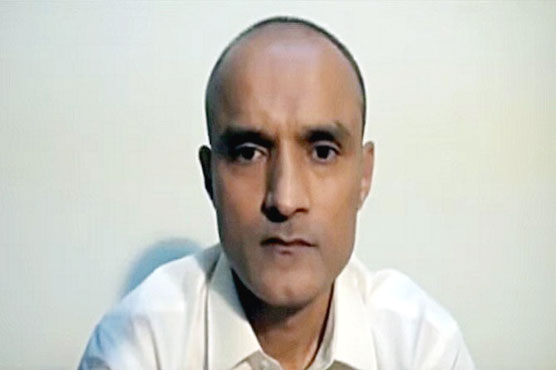 THE HAGUE (Dunya News) – Pakistan has contested in the International Court of Justice (ICJ) on Monday that the petition filed by India seeking provisional stay of death sentence awarded to spy Kulbhushan Jadhav is inadmissible as it is beyond court’s jurisdiction to rule in such a case.

Moazzam Ahmad Khan, Ambassador of Pakistan to UAE in capacity of an Agent

Syed Faraz Hussain Zaidi, Counsellor of the Pakistan Embassy in the Netherlands in capacity of an Adviser

Q.C. Khawar Qureshi as the Counsel

Joseph Dyke as the Legal Assistant

The counsel cited Vienna Convention on Diplomatic Relations of 1961 to challenge ICJ’s jurisdiction in the case. Qureshi also exposed Indian hypocrisy before the esteemed panel by informing that the petitioner concealed the fact that Pakistan had handed over evidence to Indian government in the issue.

Pakistan has maintained today that responsibility to punish terrorists lies with all of the countries. Qureshi said that the issue at hand concerns national stability of Pakistan and ICJ does not have the jurisdiction to rule over such case.

Indian petition aims at securing a stay order in the case and that is it, Pakistani counsel told the panel.

Pakistan would not be deterred in fight against terrorism and those sponsoring terror could not shake its resolve, the counsel added. Qureshi said that India owns Jadhav as its national and that there should be no interference on Pakistani soil.

India, till date, has not presented Jadhav’s birth certificate and passport, he added.

Earlier, a 13-member Indian legal team presented arguments which were branded weak by experts of the law.

The international court adjourned the hearing and reserved the verdict.

This is the second time that Pakistan and India have taken an issue to the International Court of Justice. Earlier in 1999, Indian forces had shot down an unarmed aircraft of Pakistan Navy that flew at least two kilometres inside the territory.

ICJ took up the plea filed by Pakistan seeking USD60 million in compensation from New Delhi. However, the ICJ ruled that the issue was beyond its jurisdiction.

Kulbhushan Jadhav, an agent of India’s Research and Analysis Wing (RAW), was sentenced to death for his involvement in espionage and sabotage activities in Karachi and Balochistan.

After the verdict, India moved to the International Court of Justice against the death sentence and termed the conviction in its application as “egregious violations of the Vienna Convention on Consular Relations.” India stated that it had been repeatedly denied consular access to Jadhav.

'Mughal emperor' thinks he'd not have to leave: Zardari