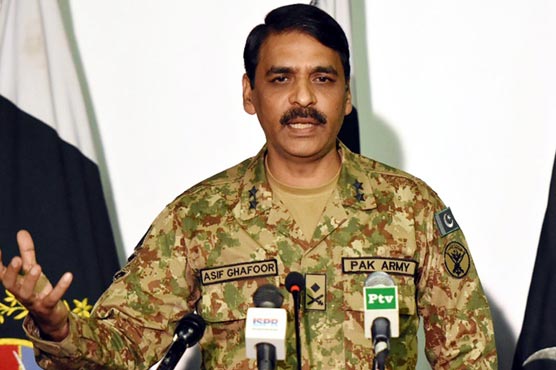 (Web Desk) – DG ISPR held press conference on Wednesday regarding settlement of Dawn Leaks issue between civilian government and military leadership. It was stated ISPR press release was not against any government office or official.

While shedding light on Pakistan Army’s opinion on Dawn Leaks issue, he said the previous notification issued by PM Office lacked necessary recommendations, adding that the rejection of the notification was not aimed at any government office or person.

“Everything that happened after the press release shouldn’t have had happened. The objective of ISPR press release was not making two sides,” he added.

ISPR DG also commented on the Chaman Border issue in which Afghan forces opened unprovoked fire at villages on Pakistan side of the border, martyring census team and security officials.

“Afghanistan is a brotherly state. Any kind of fire shouldn’t have occured,” he said while mentioning that there were two villages shared equally by Pakistan and Afghanistan.

On a question about retaliation of Pakistani forces against Afghanistan, Asif Ghafoor said they were forced to take action. Also, he rejected the Indian allegation of violating LoC ceasefire as well as killing and mutilating Indian soldiers.

He said Pakistan Army is a highly professional force and shall never disrespect a soldier even Indian. “India banned medical visas for Pakistan which created worries for patients here,” he also mentioned.

Moreover, ISPR DG replied to one of the media person’s question about Noreen Laghari saying, "She was rescued in time before becoming a terrorist". He said action taken against former TTP spokesperson Ehsanullah Ehsan was according to law, adding, "he is not being portrayed as a hero."