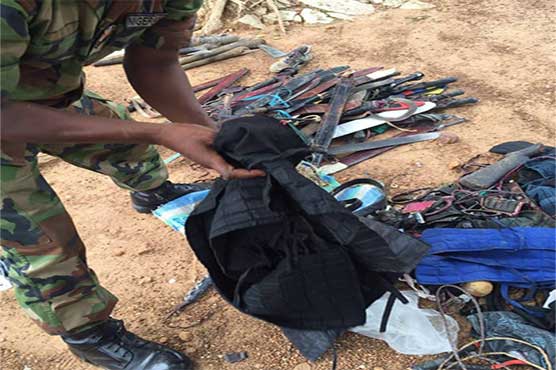 RAWALPINDI (Dunya News) – Intelligence Based Operations (IBOs) were carried out by the Pakistan Army as part of the ongoing Operation Radd-ul-Fasaad in Khyber Agency and South Waziristan.

According to the official statement by Inter-Services Public Relations (ISPR), Pak Army recovered a large cache of weaponry including arms & ammunition.

Security forces recovered SMGs, 12.7 and 14.5mm pistols and even rockets from an abandoned compound of terrorists. They raided terrorist hideouts in Lalejai and Weshtonai villages of South Waziristan.

It was also stated that joint search operations as well as IBOs were conducted in Punjab by Rangers, police and intelligence agencies.

A number of suspects were apprehended with arms during the joint operations in Lahore, Attock, Islamabad, Sialkot, Narowal, Shiekhupura, DG Khan, Rahimyar Khan and Rajanpur.