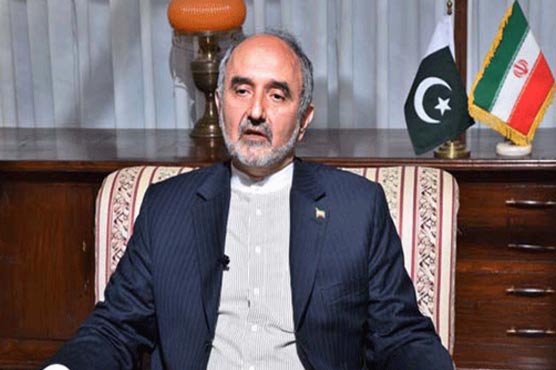 Such remarks from the Iranian side were against the spirit of brotherly relations: FO

ISLAMABAD (Dunya News) - Foreign Office on Tuesday summoned the Iranian Ambassador to Pakistan Mehdi Honardoost and expressed serious concerns over recent statements of the Iranian Chief of Staff of the Armed Forces regarding cross border actions.

It is worth mentioning here that Chief of the Armed Forces of Iran, Major General Mohammed Baqeri on Monday warned that they we will hit terrorists  safe havens regardless of wherever they are.

The Iranian Ambassador was informed at the occasion that such remarks from the Iranian side were against the spirit of brotherly relations shared by the two neighbouring Islamic countries.

The foreign office pointed out that the two sides had already agreed to enhance cooperation on the border issues during the recent visit of the Iranian Foreign Minister to Pakistan.

The Iranian side was urged to avoid making such statements that could vitiate the environment of fraternal relations.

Tension escalated between the two neigbours when ten Iranian border guards were killed by militants last month. Iran alleged that a militant group, Jaish al Adl, had shot the guards with long-range guns fired from inside Pakistan.

Iran's Rouhani faces protests at site of deadly mine collapse