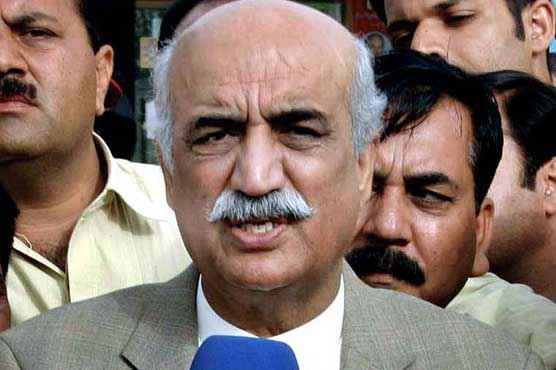 LAHORE (Dunya News) – Leader of the Opposition in National Assembly, Khurshid Shah has said on Thursday that Prime Minister could survive Dawn Leaks and Panama Leaks but would not be able to shake off the flak over power outages.

Shah addressed a rally of Pakistan People’s Party in Nasir Bagh during which he said that the rulers pushed the country back into dark days out of inefficient energy policies.

He held Prime Minister Nawaz Sharif responsible for power outages in the country.

PML-N leadership snatched away economical education and food from the people in addition to wealth through corruption, he alleged. Shah said that the premier is leading Pakistan for the past four years but the people are still enduring long hours of outages.

The opposition leader claimed that PPP’s protest rally today would shake the government today. He asserted that it was due to PPP’s rally that Lahore was not subjected to power outages today.

The rally was addressed by several PPP leaders.

Qamar Zaman Kaira, former information minister took the mic and said that the premier has been branded ‘Godfather’ by the top court and not by any opposition party.

Convoys from different districts of Punjab including Lahore have joined the protest. Punjab president of PPP Kaira earlier had warned the government that it would face dire consequences if workers are stopped from taking part.