Issuance of visa will not be concealed anymore, Ch Nisar 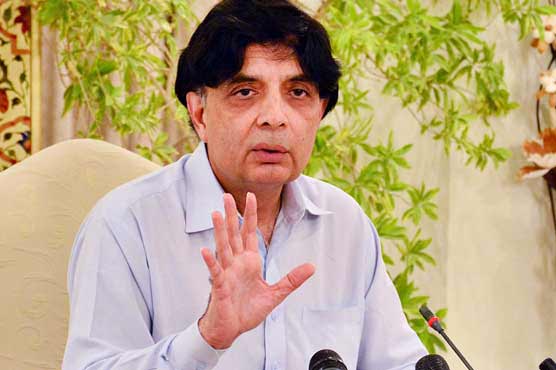 Whosoever will apply for visa; there will be a proper record at the backup, reveals Nisar

ISLAMABAD (Dunya News) – While addressing a press conference in Islamabad, Interior Minister Chaudhry Nisar Ali Khan let it be known that the issuance of visas to US citizens is a sensitive matter.

He professed that the there was no check and balance on visa issuance during the past.

The interior minister commented that he also expressed his reservations over the matter while he was opposition leader in the National Assembly.

"As Interior Minister, I personally cancel the notification back in 2014 when it came into notice," Chaudhry Nisar revealed during his media talk.

He vowed that nobody can enter into Pakistan without visa now and that the visa issuance will not be a concealed matter anymore.

Chaudhry Nisar also confirmed at the occasion that even the envoys will get one year extension in visa.

"Whosoever will apply for visa; there will be a proper record at the backup," affirmed the interior minister.

Chaudhry Nisar professed that the introduction of online visa and application process is also on the cards.

The interior minister announced that we have decided to separate the immigration department from FIA.

He confirmed that those who come to Pakistan will enter after proper security clearance.

"The faith is incomplete without having a feeling for the honour of the Holy Prophet (PBUH)," expressed the interior minister.

"Authorities at Facebook have assured that our reservations will be addressed," assured the interior minister.

He revealed that we have also informed FBI and US officials about our reservations over the matter.

Chaudhry Nisar affirmed that we will take the matter of blasphemous content to its due end and that the matter will now get solved on permanent basis.

"Facebook authorities are even ready to send a delegation in this regard," clarified Chaudhry Nisar.

The Interior Minister vowed that the blasphemous contents on social media will be halted iron hands.

He revealed that the government had written letters to Arab League, OIC and other concerned organizations in order to raise voice against such acts and to adopt a joint strategy over the matter.

The interior minister expressed that we will welcome Zardari upon his visit to Chakri.

Chaudhry Nisar let it be known that he do have political differences with Asif Zardari but not any personal enmity with the PPP Co-Chairman.

Asif Zardari decides to give 'tough time' to govt

Matter of Blasphemous content to be raised in UN