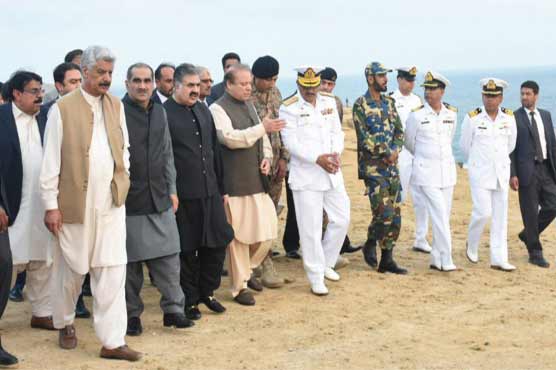 PM arrived in Gwadar from Karachi, examined the development projects under progress

GWADAR: (Dunya News) – Prime Minister (PM) Nawaz Sharif on Wednesday arrived in Gwadar from Karachi. He was welcomed by Balochistan governor and chief minister there. PM examined the development projects under progress during the visit, reported Dunya News.

PM arrived in Pasni by air and then traveled to Gwadar by road. Governor and CM also accompanied him on the visit. During the journey, PM said that CPEC was completely secure.

Later on, PM also presided over a high level meeting regarding the development projects in Gwadar. The meeting was attended by Balochistan CM, Governor, federal and provincial ministers and Balochistan Chief Secretary.

Addressing the meeting, PM said that the federal government was focusing on the development, infrastructure, energy, medical facilities and people’s social and economic progress. He directed the authorities to give the priority to the locals in the development projects.

PM expressed satisfaction over the security arrangements for the development projects. He added that Gwadar will change the destinies of the people of Balochistan as it was the gateway to CPEC.