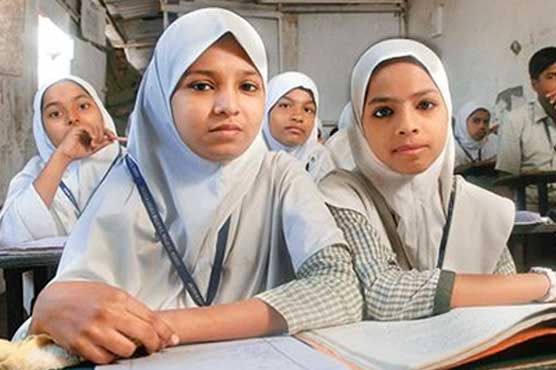 LAHORE (Dunya News) - Pakistan Tehreek-e-Insaf (PTI) lawmaker Nabeela Hakim Ali has tabled a resolution in the Punjab Assembly, seeking to make hijab compulsory for girls in all the government and private educational institutions in Punjab. 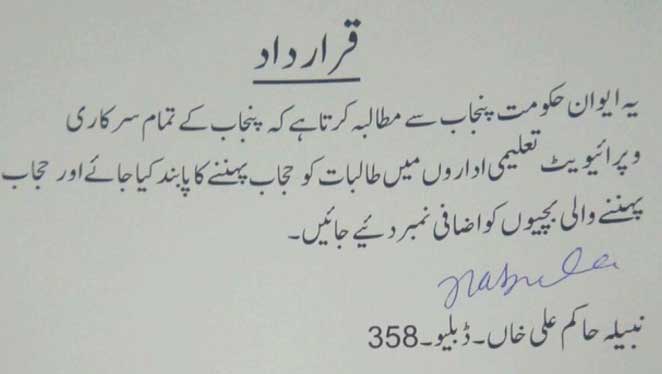 Earlier on Tuesday, Punjab Higher Education Minister Syed Raza Ali Gilani’s proposal to make hijab mandatory for government college girls and offering them "extra" marks for covering themselves up set off a furore across the country.

"Observance of hijab should be made mandatory for college girls," Gilani said while addressing the Lahore board’s divisional directors.

He added that hijab-wearing students, who fail to fulfil the required attendance, would benefit from the education department’s decision as five percent grace marks would be accorded to them.

However, the Punjab Government on Tuesday denied having made the hijab mandatory for girls at the province’s colleges.

This is absolutely WRONG news ... No such policy announced by Government of the Punjab ... https://t.co/a0fnrwg9Db

Information Secretary Raja Jahangir said: "No such summary has been received by the provincial cabinet from the Higher Education Department."

He said the Minister could not make such rules on his own without getting the approval from the cabinet.