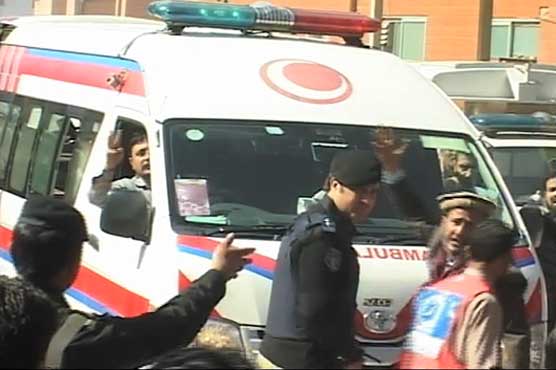 The explosion killed at least four people including a lawyer and left 17 injured.

CHARSADDA (Dunya News) – Political leaders on Tuesday have strongly condemned terror attack on local court in Charsadda that killed at least seven people including a lawyer and left 21 injured.

Prime Minister Muhammad Nawaz Sharif has said that government will continue to fight against terrorists and will succeed by the grace of Almighty. He said we are a steadfast nation and will not be deterred by such attacks.

In an ISPR tweet, Chief of Army Staff (COAS) General Qamar Javed Bajwa lauded the security officers for responding bravely to Charsadda blast and pledged support to the victims.

Chief Minister of Punjab Shahbaz Sharif also denounced the attack saying that terrorists are humanity’s enemies who have no religion. He said that strict joint operation is required to eliminate criminal activities from the country.

Lamenting the explosion, Minister of State for Water and Power Abid Sher Ali said that we need to combat networks of terrorists at any cost.

Meanwhile, Chief Minister of Balochistan also expressed great grief and sorrow over the deaths and announced to cooperate with the bereaved families.

Pakistan Tehreek-e-Insaf (PTI) chairman Imran Khan said that the soldiers who give befitting response to terrorists are real heroes of the nation.

Aftab Ahmed Sherpao said that Charsadda has become victim of terrorism several times due to lack of strategy as militants attack easy targets.

On the other hand, Awami National Party’s Zahid Khan said that Islam doesn’t allow terrorism whereas the bombings can be overcome by implementing National Action Plan (NAP).

Minister of State for Information and Broadcasting Marriyum Aurangzeb has said that such cowardly acts can not deter the resolve of the nation to stand against terrorism.

She said that terrorists have no religion. She expressed a deep of grief and sorrow over the loss of precious lives in the incident and condoled with the victim families.