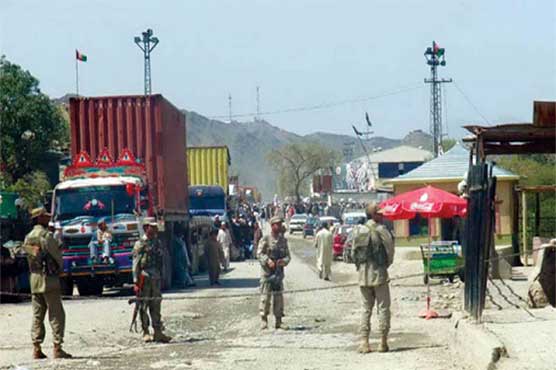 The border crossing has been sealed for all kinds of trade and commercial activities.

PESHAWAR (Dunya News) – All trade activities remain suspended at the Torkham border on the third day.

Pakistani authorities late on Thursday had sealed Torkham border crossing with Afghanistan for an indefinite period after a suicide bomb blast ripped through the shrine of Lal Shahbaz Qalandar in Sehwan town of Sindh province.

According to the authorities, the border crossing has been sealed for all kinds of trade and commercial activities.

Daesh, also knows as the Islamic State militant group, has claimed responsibility for the attack that killed 88 people and left nearly 300 persons injured.

Pakistan on Friday summoned Afghan embassy officials and handed over a list of 76 terrorists they believe are hiding in Afghanistan.

Since Monday, several bomb attacks across the country have shattered a period of improving security, underscoring how militant groups in Afghanistan still pose a threat to Pakistan.

Bike used in Peshawar blast turned out to be stolen, reveals initial probe

No option other than merging FATA into KP: Imran Khan