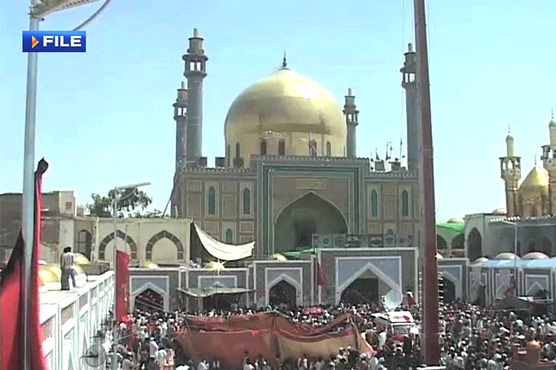 JAMSHORO (Dunya News) – More than 15 persons have been killed  and several injured as a bomb exploded at shrine of Lal Shahbaz Qalandar in Sehwan Sharif on Thursday.

Sources on the ground have reported that thousands of people had gathered at the shrine today.

Ambulances that have moved from Hyderabad require at least one a half hours to reach the attack site, according to the sources.

Whereas, Medical Superintendent of Sehwan Sharif Hospital has said that over 100 injured have been brought to the facility while the administration has received more than 20 bodies.

Prime Minister Nawaz Sharif has condemned the attack and stated that terrorists cannot deter resolve of the nation to eliminate extremism.

Spokesperson for the Government of Sindh, Nasir Shah has condemned the attack and expressed grief over loss of precious lives. While answering a question over lack of security, he said that the provincial government is making all possible efforts to counter terrorism.

This is the seventh terror attack in five days in different cities of Pakistan including capitals of Punjab and Balochistan and Khyber Pakhtunkhwa. On Monday, a suicide attacker claimed 14 lives outside Punjab Assembly on Shahrah-e-Quaid-e-Azam. The martyred included Chief Traffic Officer, Syed Mobin Ahmad and Senior Superintendent of Police.

A terrorist wearing a suicide vest rammed a stolen motorcycle into a van carrying judicial officers yesterday in Hayatabad area of Peshawar killing the driver while injuring the officials.

Last year in November, a similar kind of bomb blast was reported at Shah Noorani shrine in Hub area of Balochistan that left over 52 killed and dozens of others wounded.