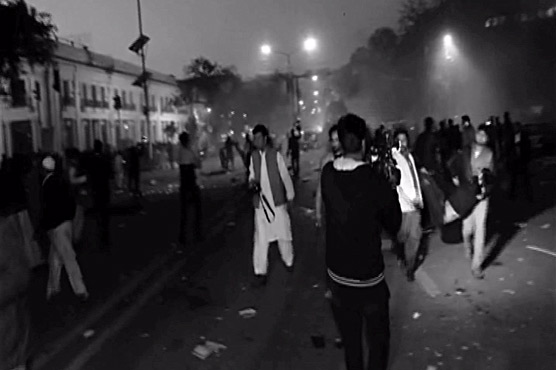 LAHORE: (Dunya News) – A blast has just been reported at Charing Cross, Mall Road. There was a protest going on at the scene when the blast took place.

The blast took place exactly at the site of Chemist and Drugist Association protest outside Punjab Assembly.

A threat alert had been communicated to Punjab government for Lahore on January 29.

Last year on March 27, 72 people had died and over 300 were injured in a blast at Gulshan-e-Iqbal Park in Lahore. The responsibility had been claimed by Jamaat ul-Ahrar, a Taliban splinter group.

23:35 Ajmal Jami shares a true story from the life of the martyred Lahore CTO Ahmed Mobin.

23:23 Brigadier (r) Mahmood Shah said that Indian and Afghan intelligence agencies have helped the Taliban and other terrorist groups to regroup and reorganise. He said that the terrorist organisations had been badly damaged after Operation Zarb-e-Azb but they have now been made to settle their issues between them, he said.

21:32 Reportedly, gunshots were heard after the attack while police contingents have arrived at the site and cordoned off the area.

The report has come in over a couple of hours after a bomb blast claimed 11 lives outside Punjab Assembly on Lahore’s Mall Road while left 73 wounded.

20:59 A Facebook message from Ahmed Mobin on December 16, 2016 as the nation mourned the Peshawar attack on its second anniversary. 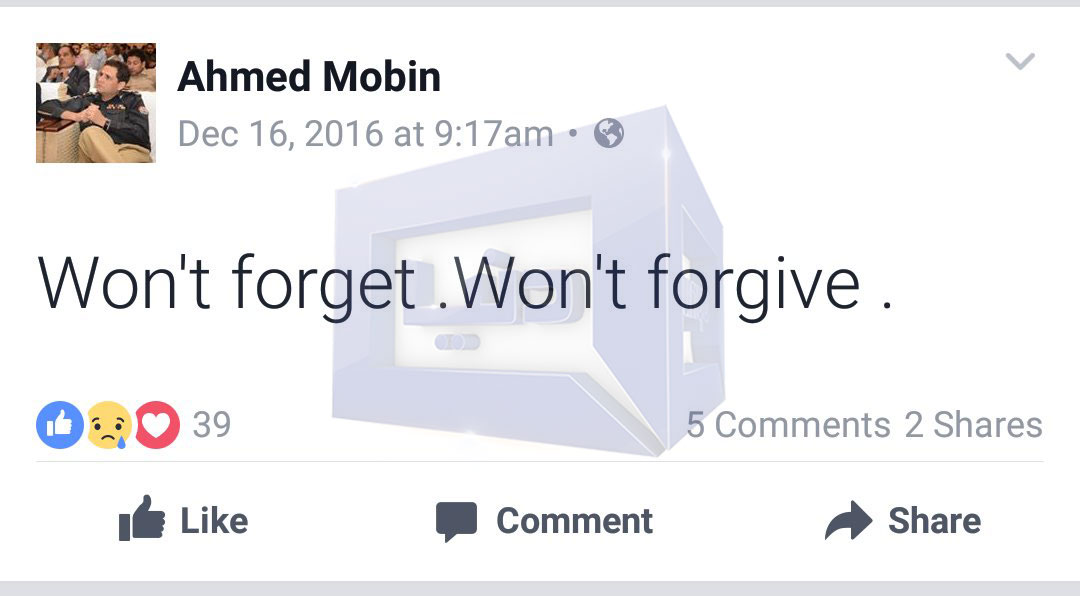 20:46 A Facebook page claimed to be run by Jamaat ul-Ahrar Peshawar Division claimed the responsibility of the attack and thanked Allah for it. The page went on to mention the name of the terrorist involved in the attack that it identified as Nasrullah aka Zabeehullah. It also threatened that more such attacks would be carried out throughout the country under Jamaat ul-Ahrar s operation termed by them as  Ghazi . 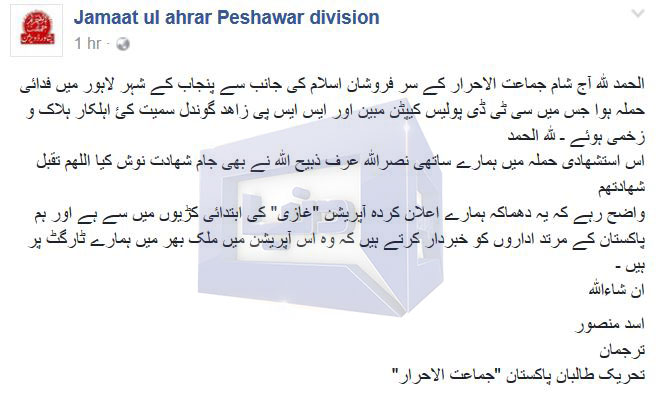 List of the dead brought to Ganga Ram Hospital: 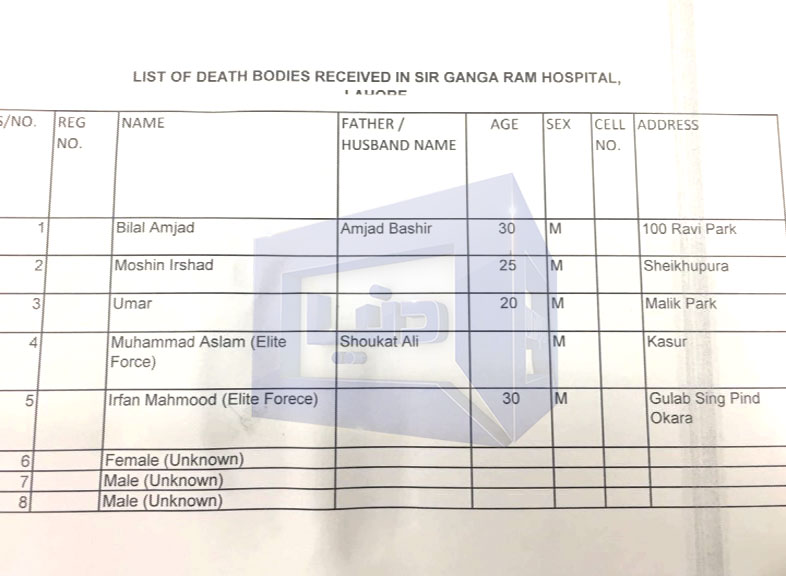 The video of the blast in the background as Lahore News and Dunya News reporters share details of the protest with the viewers.

Reporters in #Lahore who were on air at time of #blast pic.twitter.com/RQnJyNlqEL

20:08 Lahore hospitals have requested blood donations for the injured.

20:06 PML-N Traders Wing have announced to keep the markets closed in Lahore on February 14 in mourning.

20:02 Four suspects have been arrested by police from the scene of blast. 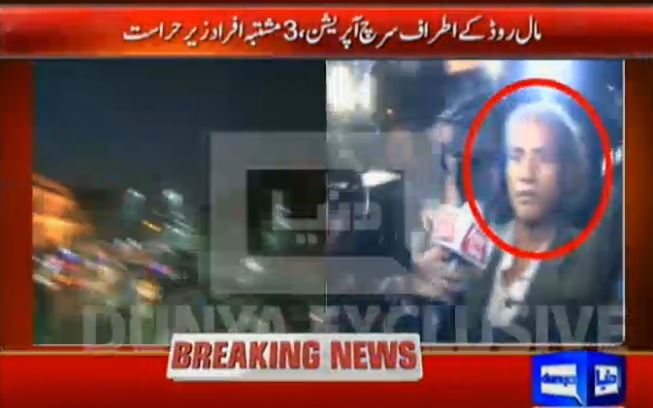 19:48 Pakistan Muslim League - Nawaz (PML-N) leader Miftah Ismail said that he had phoned the martyrted Lahore CTO yesterday and had planned a cup of team. He mourned the loss of a good police officer.

I spoke to DIG Mobin Shaheed last evening. We planned to get a cup of tea the next time I was in Lahore. What a good man he was. A real loss

Punjab Health Minister talked to media at the scene of blast, confirmed the blast was suicide

Khawaja Imran Nazir has condemned the incident and has confirmed that the blast was suicide. While talking to the media, he said that there was no need for the protest as the things could have been settled on the table as well. He requested that the people should now finally stop holding protests on this scene every few days.

Talking about the martyrs, Imran Nazir said that the police officers had laid their lives for the people of Lahore and it was unfair to criticise them on such an occasion.

19:27 Army chief General Qamar Javed Bajwa has condemned the blast and said that no stones will be left unturned for catching the culprits behind the blast.

19:25 The threat alert shared with Punjab government on February 7.

19:01 25 people had been brought injured to Ganga Ram Hospital but hospital sources have just informed that two of them have succumbed to injuries.

18:58 Punjab Chief Minister (CM) Shehbaz Sharif was scheduled to host a ceremony of all the Lahore local body representatives.

18:56 Army has cordoned off the area. It has just been learnt that all entry points of Lahore will be checked by the police.

18:48 Punjab Law Minister Rana Sanaullah told Dunya News that it seemed like a suicide blast. "It hasn t yet been confirmed but the security personnel present on the scene think that it was most probably a suicide blast", he said.

He said that hundreds of people were present at the scene and it was an inviting situation for the terrorists. He added that there is always Red Alert in the particular area. "The high officials of the police and traffic had arrived at the scene in order to discuss the situation with the protesters", he said.

Responding to a question, Rana Sanaullah said that he did have a figure but it wasn t yet confirmed so he wasn t ready to share it with the media yet.

"We aren t really sure if it is a new group of terrorists. It is the same old organisations working now from Afghanistan probably since the North and South Waziristans have already been cleared".

The threat shared with us was primarily for Governor House and some other important buildings, he said. "However, the scene where the blast took place is always on High Alert. It was mainly the high level of activity at the scene today due to the protest that probably became the reason for lapse", he said.

18:47 Dozens have been reported injured while the number of dead is also expected to rise.

18:40 Exclusive footage of the Lahore blast has arrived

18:36 Lahore Chief Traffic Officer (CTO) Captain (r) Syed Ahmed Mubeen has also been martyred in the blast. He had come to the protest in order to negotiate with the protesters. 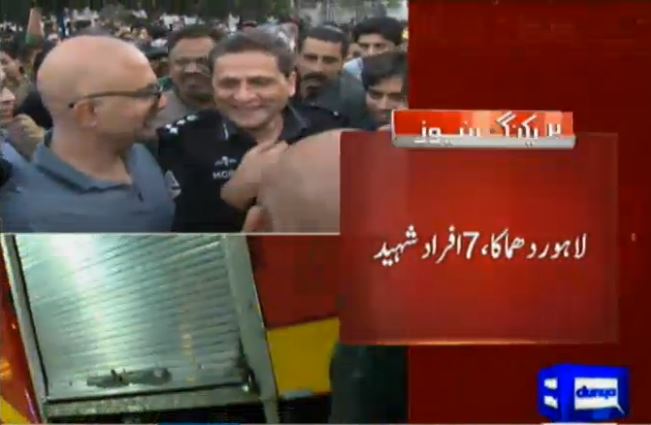 Captain Syed Ahmed Mubeen arrived shortly before the blast. He was also martyred in the blast.

18:32 It has just been learnt that seven people have been reported dead in the blast. The number is feared to increase.

It is a developing story and will be updated as soon as more details arrive.

Timeline of terrorist attacks in Lahore since 2008

National flags to fly at half-mast on Tuesday in Punjab