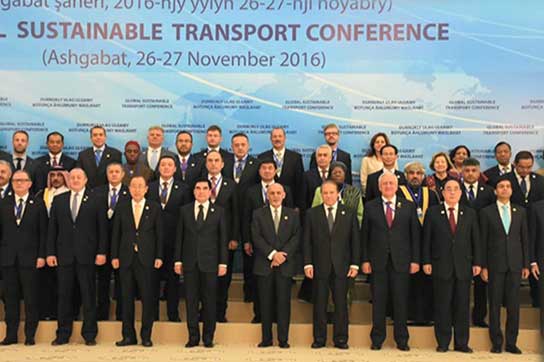 Addressing the two-day Global Sustainable Transport Conference in Ashgabat, the Prime Minister hoped that the agreement will prove milestone in achieving the dream of peaceful co existence through integration of economies, markets and cultures in South Asia, Central Asia and beyond.

“The 21st century is a century of connectivity. Without adequate internal communication networks and integration with their regions and beyond, countries will risk being left behind in the race for development. As we all know, peace and development are interlinked. Without regional peace and stability, we will not be able to reap the benefits of connectivity and integration,” he said.

Nawaz Sharif emphasized that regional connectivity and Economic integration are the key pillars of Pakistan s policy.
He said in the emerging global and regional environment Pakistan is happy to play its role as gateway to Central Asia.

The Prime Minister said peaceful neighbourhood has remained the norm of Pakistan`s foreign policy and no development policies can yield fruit without peace and security.

Nawaz Sharif said Pakistan is fully committed to its responsibilities as a partner in regional and Economic integration.
He said with projects like CPEC and One Belt One Road Pakistan has enhanced its geo strategic location into a geo Economic advantage.

“There is now a game changer; China’s One Belt One Road initiative. It aims to create world’s largest platform to integrate development of various regions in the Eurasian landmass. Pakistan as a partner is fully committed with this initiative which will go a long way in realizing our vision for transforming Pakistan into a hub of trade and commerce and harnessing its geo-strategic location into a geo-economic advantage,” the premier noted.

He said CPEC is a package of multiple infrastructure and development projects and will boost connectivity within the region and integrate China, Central Asia, South Asia and Middle East.

Prime Minister Nawaz Sharif said with mutual understanding and collective endeavors we will be able to deliver on the promise of peace, prosperity and development of our peoples.

One party trying to keep Pakistan backward through its politics: PM

PML-N might get clean chit from SC on Panama scandal: Dr Qadri