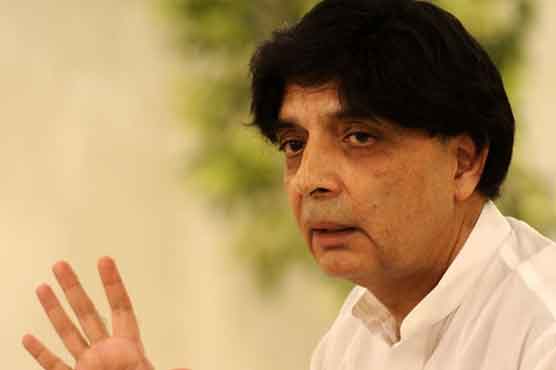 Issuance of E-passports would start in June next year, he broke the news

ISLAMABAD (Dunya News) – Interior Minister Chaudhry Nisar on Thursday has said that enemies of Pakistan benefited off Cyril Almeida’s “baseless” news report as it aided their attempts of preparing a “charge sheet” against Pakistan to malign her name on international platforms.

He addressed a press conference in the federal capital today.

Not a single Pakistani should be added to the Exit Control List (ECL) without thorough investigations, the minister reiterated.

A high-level security meeting was convened on recently which agreed that an inquiry must be done as the news story served a blow to the national security, he said while talking about a news report published in an English daily last week that claimed of a confrontation between civil and military leadership.

It was pertinent that the “whistle-blower” must be identified, he stressed.

According to the journalist, all participants of the meeting contacted him and denied the report, he claimed.

Nisar said that the issue grew only because the journalist was adamant about what he had reported and stood by the story even when all the stakeholders informed him about their denial.

A committee has been formed to probe the report and the investigation would complete within three to four days, he announced.

While answering a question about Almeida s addition in ECL, the federal minister said that at around 05:00pm he got to know that the journalist was set to fly to Dubai at 09:00pm. When a meeting earlier that day decided to hold an inquiry of the report, it was pertinent that the central character of the issue, the journalist be stopped from leaving, he said.

However, the journalist was a free man in the country and could exercise all his rights as the restriction was until the probe completed, he cleared. He further said that name of the author would not have been on the ECL if he was not to fly abroad before completion of the inquiry.

Nisar said that India advantaged off the news story to further its anti-Pakistan propaganda in the world.

The Interior Minister announced that an online system of issuance of passports has been initiated which the ministry was hopeful would solve different issues faced by the people.

Issuance of the electronically equipped passports would start in June next year, he announced. Nisar said that all passports should be issued for as many as ten years as it lessens burden on the system over renewal and consolidates the resources.

The minister said that customers would be able to renew their passports without hassle at their homes using the online system. Referring to the issuance of E-passports, the federal minister was concerned that the newspapers would give coverage to Almeida’s case and sideline the matter that should be reported.

Nisar said that a major crackdown against fake identity cards was underway.

A news story published last Thursday in an English daily sparked a controversy as it claimed that civil leadership confronted military leaders with some outstanding issues in a meeting of the National Security Committee (NSC) fearing isolation in the world amidst Indian propaganda.

Editor of the newspaper confirmed organisation’s stance soon after the situation developed. The paper stood by the story claiming that the report was verified by multiple sources before it was made published.

However, the government has denied truthfulness of the report thrice until today.