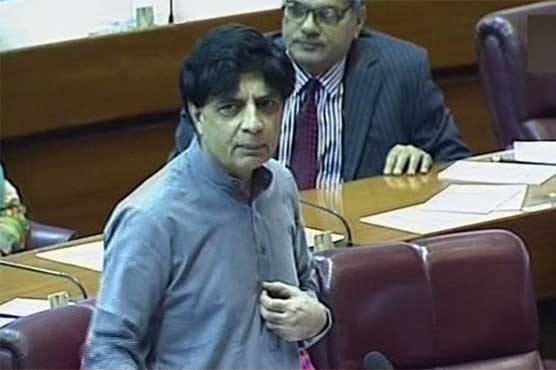 Chaudhry Nisar responded to a point raised by Iqbal Muhammad Ali in the National Assembly.

ISLAMABAD (Web Desk) - Interior Minister Chaudhry Nisar Ali Khan on Wednesday said that he will talk to DG Rangers and Sindh Government for addressing the concerns of the Muttahida Qaumi Movement (MQM) about alleged harassment and arrests of its workers.

Chaudhry Nisar responded to a point raised by Iqbal Muhammad Ali in the National Assembly.

The minister also sought time for this purpose till tomorrow and said he will report back in the House.

Earlier, Iqbal Muhammad Ali speaking on a point of order said that MQM is being pushed to the wall. He pointed out that MQM office was raided yesterday in Karachi and several workers were arrested.

Progress has been made in probe of Quetta incident: Nisar

Leaders shouldn't think that we will forget them over Panama Leaks revelations: Bilawal

Action should be taken against PML-N ministers if they back terrorists: Chandio