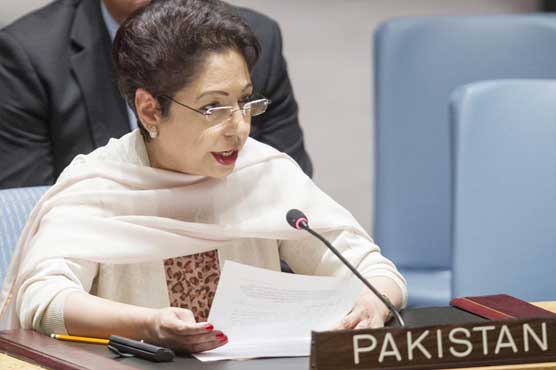 Lodhi asked the Government of Afghanistan not to externalize its internal problems .

“The US drone strike on our territory was a violation of Pakistan’s sovereignty and territorial integrity and a blatant breach of the principles of the UN Charter and international law,” Ambassador Maleeha Lodhi said, while speaking in a debate in the situation in Afghanistan.

“This unacceptable action,” the Pakistani envoy said, had “added to the intensity and complexity of the Afghan conflict.”
The drone action, Ambassador Lodhi said, had raised serious questions about whether the international community was ready to invest in war instead of peace in Afghanistan.

The use of force over the last 15 years had not led to peace, she said, advising against the continuation of such a strategy.

At the outset, Ambassador Lodhi took exception to remarks by Afghanistan’s UN Ambassador Mahmoud Saikal accusing Pakistani of interference in his country’s internal affairs and allowing anti-Afghan terrorist groups to operate from safe havens inside the Pakistani territory.

“Let me at the outset reject the unjustified, untrue and gratuitous comments made by the Afghan Representative, casting uncalled for aspersions on my country and our state institutions,” the Pakistani envoy said.

“The international community is well aware of and acknowledges Pakistan’s contribution and sacrifices in countering terrorism,” she said, while reaffirming Pakistan’s support to a genuine Afghan peace process.

“This is a somber moment for the people of Afghanistan, for the region, and for the international community, which has invested so much blood and treasure to restore peace and stability in Afghanistan.”

Ambassador Lodhi went on to ask the Government of Afghanistan not to externalize its internal problems and blame others for its own failures.

Other than Afghanistan, Pakistan had suffered more than any other country from the consequences of terrorism, she said, describing her country’s counter-terrorism operations, the largest in the world.

“Effective border management is the sovereign right of my country,” she said in that regard, stressing that there was nothing illegal about any construction on Pakistan’s side of the border, while rebutting the Afghan ambassador’s claim.

“Pakistan will take measures on its side of the border accordingly,” Lodhi said.

“It is disingenuous to characterize steps aimed at regulating the border as illegal.

There is nothing, repeat nothing illegal, about any construction on our side of the border,” she said emphatically.

“Success will be assured only when the Afghan parties themselves come to the conclusion that there is no military solution to the Afghan war and peace can be achieved only through an unconditional dialogue, which will require difficult compromises by both sides,” Ambassador Lodhi said.

Ambassador Lodhi pointed to UN Secretary-General’s Ban Ki-moon’s report which said there was no significant improvement in the political, security and economic situation in Afghanistan.

Ultimately, she said, it was the responsibility of the Afghan Government to deliver on commitments made to its own people, she said, stressing that a negotiated peace was the only way to end the conflict.

Earlier, In a briefing to the Security Council, Nicholas Haysom, the UN

Secretary-General’s Special Representative for Afghanistan, voiced concern over the security situation in Afghanistan.
“The battlefield in many areas is in a state of flux, with gains and reversals but with neither side effecting clear dominance,” said Haysom, who is also head of the UN Assistance Mission in Afghanistan (UNAMA).

“The security forces continue to face serious challenges, including in addressing questions of morale, leadership, attrition and logistics. For now, though, they are holding their ground,” he added.

Haysom said he remains deeply concerned about the impact that the high level of violence is having on the civilian population.
“There has been no let-up during Ramzan, during which period there have been some reports of disturbing brutality, including attacks on worshippers,” he said.