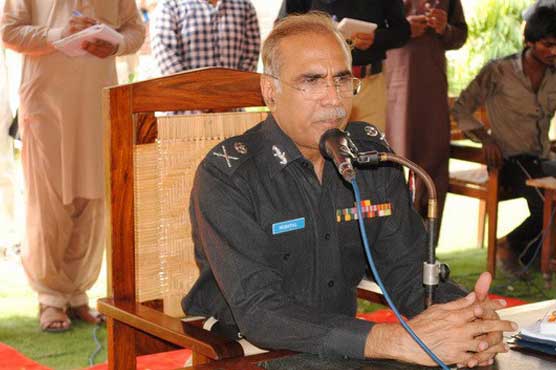 None had imagined that enemies of humanity would target innocent children, says IGP

The Inspector General addressed a ceremony organised in connection with the recent passing out of Dolphin Force’s inaugural batch.

He said that none had imagined that enemies of humanity would target innocent children and women like they have. The law enforcers had no warning regarding the recent attack, he added.

He said that the department had reasons to believe that Muhammad Yousaf was the suicide bomber however, the misinformation was clarified once correction was made.

The Inspector General ensured that Dolphin Force would not leave any stone unturned to keep the locals safe and sound.

Earlier, authorities had believed a Muzaffargarh local named Yousaf to be the attacker however, the claims were reverted after his friend provided reliable proofs proving otherwise.

The clouded situation further cleared after Taliban faction, Jamaat-ul-Ahrar released picture of the bomber. Spokesperson of the banned outfit stated that a video message, recorded prior to attack would be released soon.

"We carried out the Lahore attack," Ehansullah Ehsan told media by telephone on Monday from an undisclosed location.

He said the group would carry out more such attacks, vowing to target schools and colleges alongside government and military interests.

An attack on Sunday (Easter) in Lahore’s well-known recreational spot, Gulshan-e-Iqbal Park claimed around 74 lives while left over 300 wounded. Chief of Army Staff (COAS) General Raheel Sharif ordered an immediate search operation across the province that resulted in more than 300 detainees.

Prime Minister (PM) Nawaz Sharif ordered authorities in a meeting he chaired on Monday to conduct operations in bordering areas of Punjab.