Sacrifices of Shawal's martyred soldiers will not go in vain: PM 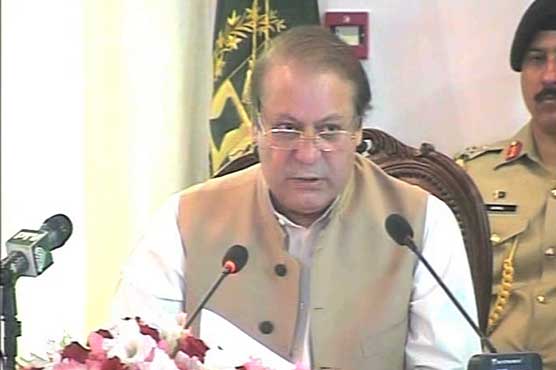 Those who sacrificed their lives are the pride of the nation, says PM Nawaz.

ISLAMABAD (Dunya News) – Prime Minister (PM) Nawaz Sharif Sunday paid his tributes to the army officers martyred in Shawal by terrorists. PM Nawaz stated that the sacrifices of the martyred soldiers will not go in vain and they will always be remembered in prayers.

Expressing his condolences to the families of the fallen soldiers, PM Nawaz stated that the martyrs had displayed exemplary courage and bravery. He further added that the country needs such examples as set by these soldiers.

He added that the martyred army officers had not compromised on the security and safety of the nation and had shown fearlessness up until their last breath.

PM Nawaz stated that those who had sacrificed their lives are the pride of the nation.

Earlier on Saturday a ground operation by Pakistan army in Shawal Valley left 19 militants dead while 5 soldiers including a Captain also embraced martyrdom during the exchange of fire.

According to Inter Services Public Relations (ISPR) the militant group wanted to cross Pak-Afghan border but were timely intercepted by security forces who thwarted the terrorist group’s attempt.

Against PM's stature to talk about NAB: Shujat

LNG import to help end the energy crisis by 2018: Abbasi