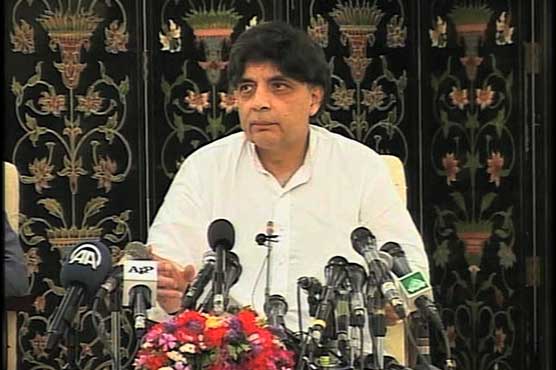 Govt. ready to make amends if MQM, PPP have any reservations about the operation, says Ch Nisar.

WAH CANTT (Dunya News) – Federal Minister for Interior Chaudhry Nisar Ali Khan on Saturday stated that Karachi’s conditions were improving since an effective operation was launched against extremist elements in the city. Nisar also stated that the operation will be intensified in the coming days.

Speaking with the media at Wah Cantt, the Interior Minister said that Karachi’s situation required an operation, which was started after a complete consensus with all the political parties.

Nisar stated that the government was ready to make amends if Muttahida Qaumi Movement (MQM) and Pakistan Peoples Party (PPP) have any reservations regarding the ongoing operation.

Dr Asim's fate to be decided as per law: Ch Nisar

Some MPs recommended hiring of foreigners in Nadra: Ch Nisar

Nisar writes letter to IOM against deportation of overseas Pakistanis